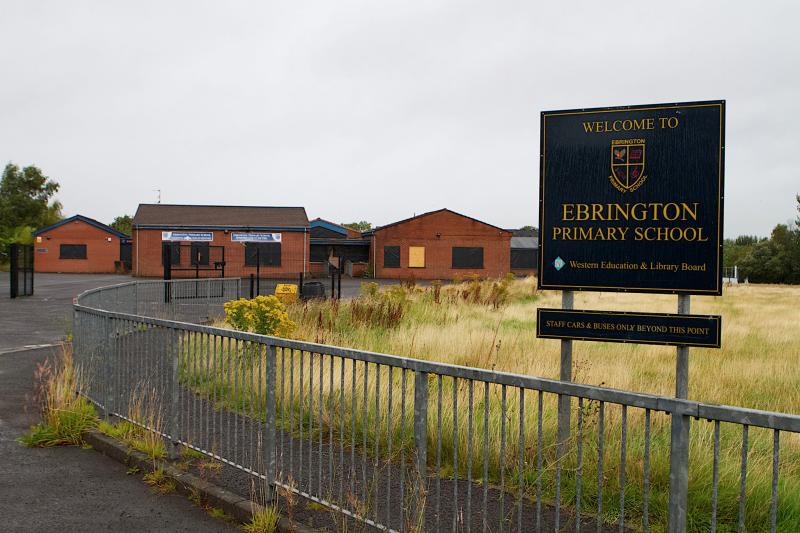 There have been call for a former primary school in the Waterside area of Derry to be demolished after the latest arson attack on the site. The fire broke out at the former Ebringtown Primary School on Ulsterville Avenue in Clooney at 7.30pm last Thursday night. Another fire was reported at the site a short time later. The building was extensively damaged as a result of a previous arson attack in July of last year. Three appliances from the Northern Ireland Fire and Rescue Service’s (NIFRS) Crescent Link station attended Thursday night’s blaze, which is believed to have been started deliberately. Speaking after the incident, the DUP councillor David Ramsey said that the Education Authority (EA) must now take action to address the ongoing incidents of vandalism at the school site. “The Education Authority must do everything in its power to make the site safe and I would impress upon them the need to do so quickly, whether it is by putting security measures in place, removing the roof or demolishing the building,” he told the Derry News. “We need to stop this area from being an attraction for young people, as they don’t understand the dangers it can pose.” Alderman Ramsey also appealed to the community to report any suspicious behaviour to the police. ““We are asking the community to be vigilant and to phone the police or the community warden if they see any suspicious activity in the area,” he continued. Meanwhile, a spokesperson for the PSNI appealed for information about the incident. “The Northern Ireland Fire and Rescue Service dealt with a fire at the property shortly after 7:40pm,” the spokesperson said. “Firefighters dealt with a secondary report of fire at the premises at around 7:50pm. “There was a report of a well-developed fire inside the property which caused substantial damage,  which was extinguished by firefighters.” The spokesperson added: “Police would appeal to anyone with any information or who saw anything suspicious in the area to contact police on 101 quoting reference number 119 17/8/18. “Alternatively, information can also be provided to the independent charity Crimestoppers on 0800 555 111 which is 100 per cent anonymous and gives people the power to speak up and stop crime.”
ADVERTISEMENT - CONTINUE READING BELOW