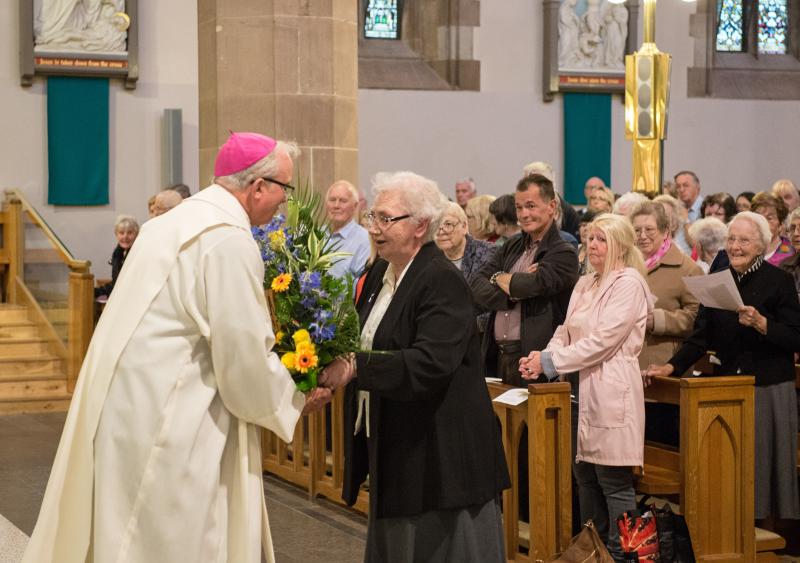 THOUSANDS of local people are expected to travel from Derry to Dublin for the visit of Pope Francis this weekend. The local clergy and members of the public will make the journey to Dublin on August 26 for the World Meeting of Familes event where Pope Francis will say Eucharistic Mass to 500,000 people at Phoenix Park. However, many will travel days in advance for a three-day congress with speakers, workshops and discussions, which began yesterday at the RDS. The Pope’s 36-hour visit will begin at Croke Park for the Festival of Families on August 25 and he will travel to Knock for a short visit on Sunday before returning to Dublin for the Mass at 3pm. Bishop of Derry, Donal McKeown, said he expects thousands to make the journey from Derry to Dublin with some parishes running four or five coaches each. A special train service run by Translink will also depart from Derry at 5.40am on Sunday, August 26. The Bishop was speaking as hundreds of parishioners attended a special opening ceremony held at St Eugene’s Cathedral on Tuesday night ahead of the visit. He commented: “There’s a real interest around the country about what’s going to happen during the course of the next five or six days in Dublin. “Obviously there’s lot of controversy involved but there is still a very large crowd hoping to be in Dublin for the congress on Wednesday, Thursday and Friday and then for the two big days at the weekend on Saturday and Sunday. “I think it has engendered a degree of interest and I hope that people are nourished by it rather than disappointed. “There are a large number of buses, plus our train, full of people going down to Dublin both during the week and then particularly for Saturday and Sunday. “We had plenty of tickets here for Croke Park, and we have none left at this stage, they’re all gone. “We have a high level of interest and I think people haven’t been put off by the distance, there’s a sense of adventure going to one of those events and it certainly won’t happen for another long time to come. I’m expecting thousands to travel.” Since the last Papal visit in 1979 by Pope John Paul II, the Catholic Church in Ireland has been immersed in scandal with the uncovering of widespread clerical sexual abuse of children and cover-ups. On Monday, Pope Francis condemned the ‘atrocities’ of child sex abuse and acknowledged the Church’s failings in a letter to the world's 1.2bn Roman Catholics. Bishop McKeown believes Pope Francis will not shirk from the issue but will ‘hold a mirror up to the Irish Church’ and challenge it to fulfil its role in society. “I think what the Pope will do is, he will hold a mirror up for the Irish Church to look at itself, to see how well it is serving the gospel. But I think he will also hold a mirror up to Irish society and say, why are we losing so many young people? Why is there this level of dysfunctionality? Why is there so much fragility in relationships? “I hope he will ask awkward questions and speak the truth in love about how the Church needs to repent and equip itself if it is to be a credible witness of God’s mercy and love in 2018. I hope he will encourage civil society to look beyond the gloss and the jingles if it is to cherish all the children of the country equally.” He added: “I hope and pray that Church and state learn from the mistakes of the past but not be trapped by only looking backwards. The blame game always seeks the fault in somebody else. The uncomfortable Gospel asks leaders of all sorts in society to take the plank out of their own eyes first so that they can see where the uncomfortable truth lies. “I think he will look to challenge the Church to be at the service of building a healed, reconciled society here, but I think he will not spare his punches in terms of asking civic society how well they’re doing. “What I hope is that it actually provides a stimulus for local adult conversation, he’s not a magician coming in from abroad to wave a magic wand, but I hope he will give us nourishment and material to help us have serious local discussions here about the way forward." The Bishop added that isn’t confident that Pope Francis will visit Northern Ireland in the future and said there were failed attempts to persuade him on this occasion. “I have no idea what the Vatican’s plans are, he is an old man, he’s 82 and just does short visits for particular reasons,” he told the Derry News. “I mean, he hasn’t even been to his home country of Argentina yet. “It would be lovely if he did come here because all of the Church leaders are keen to invite to be here and he’d be very welcome, he can be assured of that. But I have no idea of any plans, even in drafted form for that.” Bishop McKeown will have a busy schedule himself during the trip as he takes part in discussions at an event involving young people and makes himself available to various media outlets and anyone who wishes to ‘air their complaints or tell their dreams or whatever else.’ “It’s important that I be available for people down there, I’m happy to walk around and engage with whoever I come in contact with, that’s how you build relationships,” he concluded ABOVE -Bishop Donal McKeown receives a gift for the altar from a parishioner at the Derry Diocese WMF celebration, held in St Eugene’s Cathedral on Tuesday evening last.
ADVERTISEMENT - CONTINUE READING BELOW