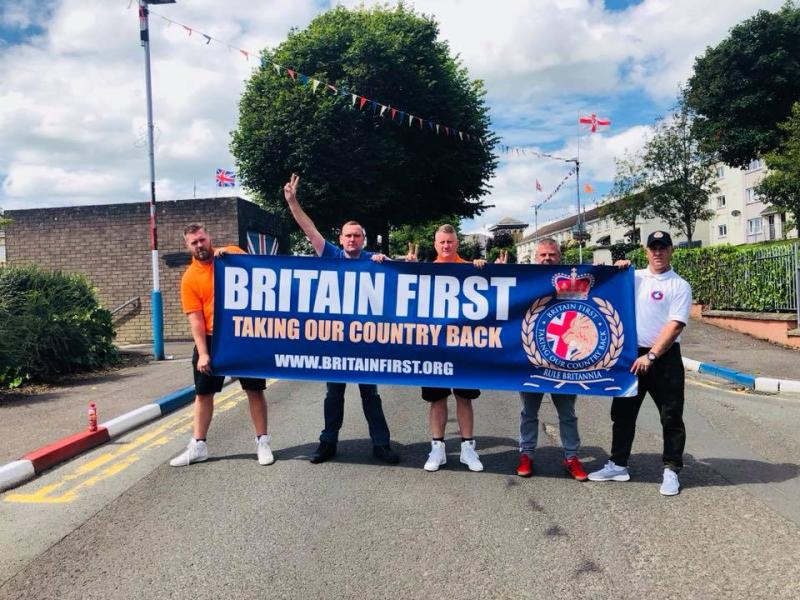 The organiser of an anti-fascist rally in Derry has said the ‘politics of hate’ and ‘scaremongering’ peddled by far-right group Britain First will not be tolerated in the city. Leaflets promoting racism were recently posted through doors in Derry by supporters of Britain First. It has emerged that representatives or supporters of the far-right party have been delivering flyers containing fascist propaganda in recent days. A number of these were posted to homes in the Fountain estate in Derry. They claim that 23,000 ‘known extremists walk our streets’ and says, ‘overcrowded immigration is out of control’. Britain First and its supporters have taken to the streets in recent months in efforts to promote their anti-immigrant far-right agenda in Northern Ireland. Paul Golding, leader of Britain First, posted photographs of himself and other members of the organisation visiting the Fountain in July, pictured above. Several dozen people attended a rally at the Guildhall on Saturday to Unite Against Racism, among them were migrant workers, anti-fascists, anarchists, socialists, trade unionists and non-aligned activists. They gathered in response to a reported rise in racist hate crimes, an unannounced visit to the Fountain Estate at the end of July by Britain First and the distribution of its racist leaflets. Rally organiser Davy McAuley said a message has to be sent to the far-right that ‘they're not welcome in Derry’. “We are committed to confronting them and challenging their politics of hate,” he added. “Derry is a city of Civil Rights. It's the 50th anniversary of the great struggle here to challenge discrimination. We will fight for a city that welcomes everyone - refugees, migrants and Muslims. “Fascists and the far-right are attempting to scapegoat those they deem to be different. They operate through intimidation. “That's why it's so important there are people here representing the North West Islamic Association, trade unions, community groups, political parties, the LGBTQ community, refugee rights and anti-fascist campaigners. This is the kind of broad movement we need to challenge racism and make sure fascists and neo-nazis can't spread their racist message." Speaking after its visit to the city last month, Britain First vowed to bolster its presence in the north. They added: “Britain First in Northern Ireland is taking off in a big way, especially after our successful indoor rally on Saturday. “This is only the start for our new organisation in Northern Ireland. “A new regional organiser and deputy have been appointed as well as a committee of top activists to plan activities across Northern Ireland.” Speaking this week, Ivanka Petrova Antova from United Against Racism warned against the normalisation of racism and the need to ‘push them back’ "The simple message we want to send in Belfast and Derry is that migrants are welcome but not racists are not. “We shouldn't forget that behind Britain First stand white supremacists, fascists and neo-nazis. We can't allow the language of racism to become normalised. “They claim to be for free speech but they violate free speech. We want to invite everyone to our Diversity Carnival in Belfast on September 1. “We will be united against racism and celebrating the contribution of migrants and refugees. "The racists only retreat when the trade unions and our networks push them back."
ADVERTISEMENT - CONTINUE READING BELOW