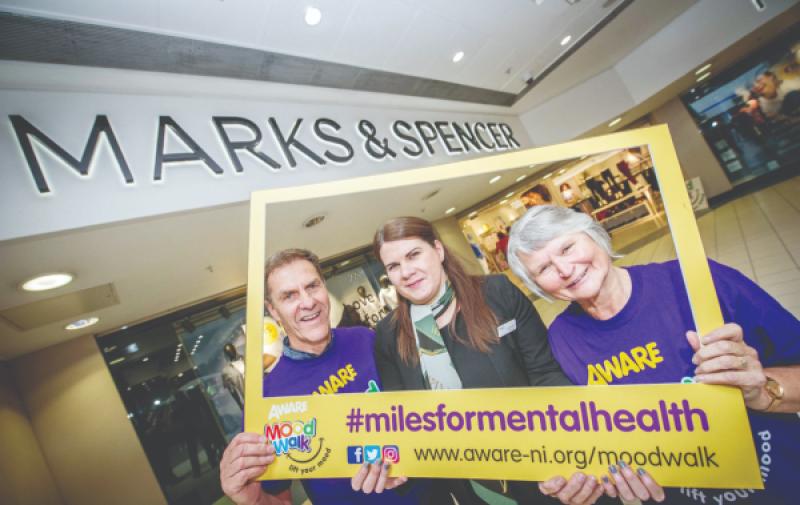 AWARE, the depression charity for Northern Ireland, is encouraging people in Derry to sign up for its Mood Walk, which takes place at the beginning of next month. The 5k walk, which is supported by Marks & Spencer, will take place on Sunday, September 9 to mark World Suicide Prevention Day on September 10. The event is open to everyone and will depart from Pure Gym at the Strand Road, next to Smyth’s Toy Store. Speaking ahead of the event, Margaret McCrossan, Fundraising Officer from AWARE said the walk gives people the opportunity to show their support for those suffering from mental health issues. “In 2016, a total of 297 people lost their lives to suicide in Northern Ireland,” she said. “This is a frightening statistic and what’s even more shocking is that Northern Ireland has statistically higher levels of mental health problems than the national average. “The AWARE Mood Walk provides an opportunity for people to step out, show their support for those suffering with mental illnesses such as depression, and in-turn challenge the stigma many still face in society today.” She continued that walk will begin with a short motivating warm-up to ensure participanst are both physically and mentally prepared for the event.” “Participants are encouraged to fundraise through sponsorship with all monies raised going directly to educating and supporting those suffering with mental illnesses,” she added. “We’re also absolutely delighted to have the support of M&S this year who, through their Foyleside store, have been able to promote the event to an extensive network of customers and colleagues.” For further information visit -  www.aware-ni.org
ADVERTISEMENT - CONTINUE READING BELOW