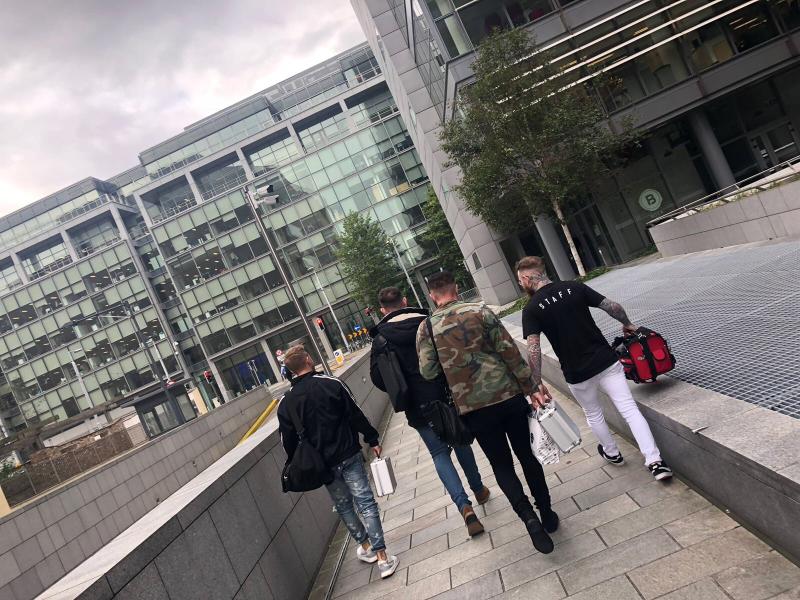 By Orla Mullan MOST people can only dream about getting a chance to work for top US pop icons such as Britney Spears. However, for one Magherafelt man, that dream became a reality last week. Chris Graham, owner of Barbers of BT45 was chosen to cut all the male backing dancers’ hair before Spears’ Dublin gig on August 20. The ‘Piece of Me’ concert, held in 3Arena, was part of the star’s first world tour in seven years and was an immediate sell out, attended by thousands of fans. The once-in-a-lifetime opportunity came about following a meeting between Chris and the US pop sensation’s team at Brighton Pride earlier this month. Chris, who was attending the UK’s biggest pride festival, said: “I had worked in Disney World ten years ago and was in Brighton attending her concert with past Disney friends who knew her team. We were invited to join them all backstage. It was incredible, we were on their tour buses, seen all the supporting acts, and got to experience what behind the scenes of a festivaI is actually like. I was talking to her team and they asked me what I did for a living.  When I told them I was a barber, they said they might need someone to cut their hair during the Dublin leg of Britney Spears’ tour. “I received initial contact two weeks ago asking if I would go to Dublin to cut the eight male dancers’ hair.” With eight haircuts to fit in between dance rehearsals on the day of the concert, Chris decided to enlist the help of four members of his senior staff – Matty Young, Cathal McCormack, Marty McErlean and Megan Ludlow.  Unfortunately, Megan was unable to make the trip due to a prior engagement, but the other lads were delighted to take on their biggest job to date. Chris, a former student of Holy Family Primary School and St Pius X College in Magherafelt, said it was a great ‘honour’ to be chosen to work for ‘one of the biggest selling pop artists of all time’. “The boys who work for me have all been trained by me and they were so professional throughout it all.  I couldn’t be prouder of them.  The dancers were so happy with their haircuts and it also gave the boys their first glimpse of working within the world of celebrities and session styling.” Chris, who has 15 years’ experience in the barbering industry, opened Barbers of BT45 almost five years ago and since then he has seen the business go from strength-to-strength with the opening of Barbers of BT80 in Cookstown, Salon 45 and the BT45 Barbering Academy, having trained over 120 students since it opened. A former Disney World employee, Chris has also notched up barbering experience in Australia. Just last year he launched his very own range of products and is currently in negotiations to have them distributed throughout Ireland. Last night Chris revealed that Britney Spears’ tour management team have been in contact again about future projects, however he is keeping shtum until all is finalised. “It’s great that we have got a lot more opportunities out of this.  It just shows you that one opportunity can open so many doors,” he added.
ADVERTISEMENT - CONTINUE READING BELOW