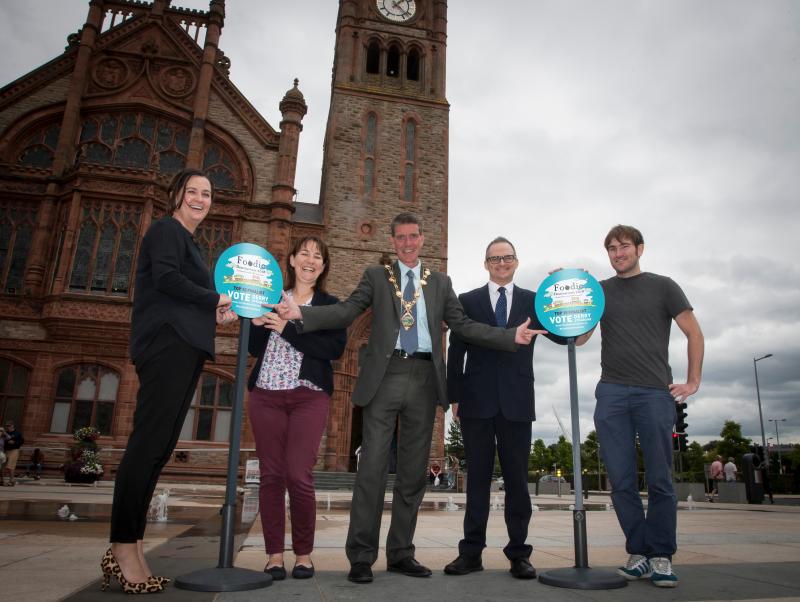 Derry and Strabane was pipped at the post in a close fought battle for the title of Foodie Destination as Kilkenny emerged top of the list of ten shortlisted food destinations on the island of Ireland. Derry was one of ten of the country’s best known food tourism hotspots in the running for the Foodie Destination title, and secured a top position on the fine food map. The announcement was made last night following a nationwide campaign calling on food lovers to vote for their favourite foodie destination and judges for the competition visited the city in mid-August to experience some of the North West’s finest cuisine and met with local chefs and innovators involved in the local food industry. The Mayor of Derry City and Strabane District, Councillor John Boyle, said he was delighted that the city had been included in the top ten foodie destinations and paid tribute to everyone involved in the campaign. “I think we put in a fantastic effort and to be included in the top ten foodie destinations on the island of Ireland is a great endorsement of Derry and Strabane as an exciting new food tourism destination and one that will really raise the city and district’s profile in terms of the quality of our restaurants and our local produce. He said: “This is an amazing achievement and a very well deserved accolade for the city and district and evidence of the huge amount of work that has been done in not only raising the profile of our restaurants and local produce but of the quality of our food tourism offering. “Council has been working closely over the past number of years with food industry professionals and suppliers to significantly raise the standards of what’s on offer locally to meet the growing expectations of our international visitors. Being a runner up in the Foodie Destination title for 2018 is a fitting reward for that hard work and recognition of our success in being one of the best location in terms of food provenance and culinary talent on the island of Ireland.” Jennifer O’Donnell, Tourism Manager with Derry City and Strabane District Council said she was delighted the city and district’s food tourism offering had been recognised in the competition. “We are really pleased to have been included in the top ten Foodie Destinations and are really proud of the way everyone worked together to get involved in the campaign. A huge amount of work is being done right across the city and district by the local restaurant owners, chefs and food innovators to ensure they provide top quality product and service. We felt it was really important that we put ourselves forward for the award and to get recognition for the significant investment that has been put into the food and drink industry locally. “The food tourism industry is hugely important for the city and is a key economic driver. We have seen a lot of investment in the industry over the past number of years and locals and tourists alike will agree that the food offering in this region is second to none, thanks to quality locally produced produce and talented culinary chefs and friendly staff. Derry is already renowned within Northern Ireland as a leading food destination following our award as Destination Delicious and being in the top ten Food Destinations for 2018 is now highlighting that to a new audience across the island of Ireland. Participating in this award and getting such positive feedback about our offering is supporting our overall aim of becoming a standout food destination and we are delighted that our hard work has paid off,” she said. Jennifer added that participating in the competition was not possible without the partnership with funders, agencies and those working within the food tourism sector. She added: “As a Council we are delighted to be working with them to offer them support and assistance to showcase their offering and to play host to a number of dedicated and popular food showcase events which draw thousands of visitors every year, including the Legenderry Food Festival, Flavours of the Foyle, and the Slow Food Festival, as well as monthly outdoor markets in Derry and Strabane. “We would like to thank everyone who took the time to vote for us in the competition and look forward to working with our partners and food tourism providers throughout the year to further develop and enhance our unique food tourism offering,” she concluded. The prestigious Foodie Destination competition is run by the Restaurants Association of Ireland, with Kilkenny securing the title ahead of Derry, Galway, Kinsale, Sligo, Armagh, Monaghan and Glaslough, Cavan, Boyne Valley, and Mid and East Antrim Borough. Pictured above: The Mayor, Councillor John Boyle pictured in July at the launch of the Foodie Destinations 2018 Voting Call for Derry outside the city’s Guildhall. The city was included in the top 10 finalists. Included from left are Catherine Goligher, Tourism Officer, Derry City and Strabane District Council, Aideen McCarter, Head of Culture, DCSDC, Mark Toye, General Manager, Bishop’s Gate Hotel and Stephen Forbes, Mekong.
ADVERTISEMENT - CONTINUE READING BELOW