Over £5,000 raised for local charity in memory of popular Derry man JP Coyle 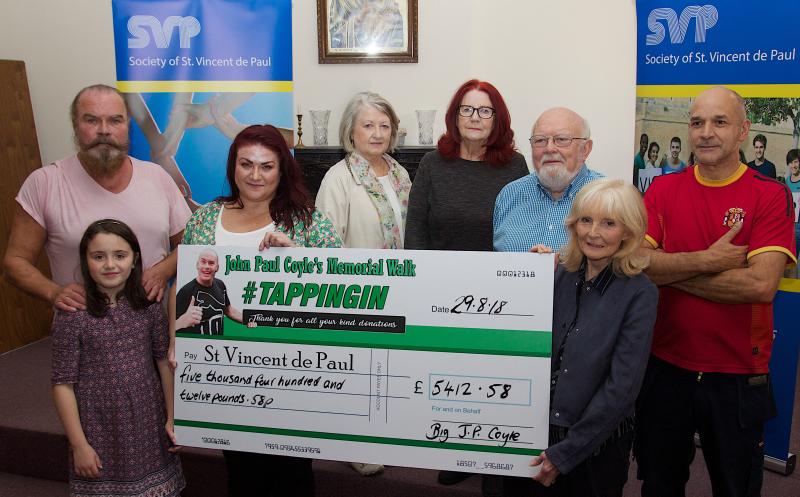 THE family of a popular Derry man who passed away earlier this year have raised over £5,000 in his memory. John Paul Coyle, was a familiar face to many people around the town and was affectionately known as the ‘gentle giant’. He died suddenly at his home in Crawford Square in February as a result of a previously undiagnosed heart condition, Cardiomyopathy. The Coyle family decided to hold the ‘John Paul Coyle Memorial Walk’ earlier this month on what would have been the week of his 41st birthday. But it wasn’t until after his death that the family learned just how many people JP had helped and supported over the years. “JP loved to walk and it would have taken him three hours to get up the town because he would have stopped and talked to that many people,” explained his sister, Jenny Coyle. “We knew he was well known because people would always say to me ‘I seen your Johnny out walking’ but we didn’t realise just how much he people he knew. “There are still people coming up to my mammy and daddy telling them how he helped them. “There was one woman who he helped through her pregnancy. “She was working in a shop at the time and he would have come in every day and brought her a bun and made sure she was okay. “He helped people with addiction problems and mental health difficulties as well and this would have been ongoing for months at a time.” Jenny said that the outpouring of support from the people of Derry has been a great comfort to the Coyle family. “I think the grief didn’t really hit me until that week,” she explained. “It was just so sad not being able to see him on his birthday “As a family we just want to thank the people of Derry. It has been the best of times and the worst of times. “The day of the walk was my favourite day apart from the day my daughter was born.” “It’s just been so fabulous, everyone has been so, so generous - Derry people really do pull together.” JP’s father, Vincent Coyle,agreed were overwhelmed by how many people came on the walk and donated money. “It is a wonderful tribute to my beautiful son,” he said. “Derry is a little city that doesn’t have much and yet it keeps giving in the most wonderful way and gave such a substantial amount in memory of JP.” The charity walk was followed by a memorial night organised by JP’s friends Bob McLaughlin and Soupy Campbell who he grew up with in Rosemount. “It was such a lovely night. They organised Balloons with JP’s name on them and we released them in Academy Road,” said Jenny. On Tuesday the Coyle family presented a cheque to St. Vincent De Paul (SVDP), with all the money raised on the walk and memorial night. It was a charity that was close to JP’s heart, Jenny added. “JP was very, very kind to SVDP,” said Jenny. “He loved going to the chapel when it was quiet and lighting candles and he was always putting money into the box. “He would have helped them too lifting furniture and things. “A lot of people are facing hardship at the minute with the introduction of the Universal Credit benefits, and SVDP help people in a very discreet and quiet way.” Vincent added: “SVDP do amazing work especially in these times of austerity and cuts. “Every penny does count.” Above - The Coyle family pictured presenting a cheque for £5,412.58 to St. Vincent de Paul's Sally Kennedy, president of Our Lady's Longtower Conference, Dominic Burke, president St. Eugene's Conference and Sean Gallagher, St. Eithne's Conference. The money was raised from John Paul Coyle's Memorial Walk 'Tapping In'.
ADVERTISEMENT - CONTINUE READING BELOW