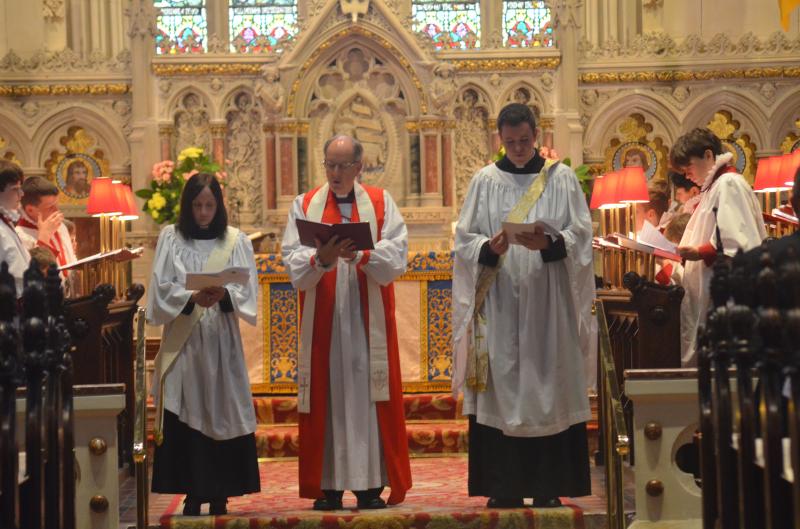 Two new priests have been ordained for the Diocese of Derry and Raphoe at a service in St Columb’s Cathedral. The Reverend Sean Hanily – a native of Roscommon – and Enniskillen-born Reverend Lindsey Farrell were ordained by the Bishop of Derry and Raphoe, Rt Rev Ken Good, who described them as "stars" whom the Diocese was blessed to receive. Reverend Farrell has been appointed Curate of the Grouped Parishes of Inver, Mountcharles, Killaghtee and Killybegs in south west Donegal, while Reverend Hanily will serve as Curate-assistant of the Parish of Drumragh and Mountfield in Tyrone. Both priests’ families were in church for the service, along with new colleagues from the diocese, representatives of their new parishes and of parishes where they had served previously. In his sermon, the Reverend Canon John Merrick, said he had sought the heart and mind of God for a meaningful word that both ordinands could carry with them through the years of labour in the fields of harvest to which they had been assigned. Canon Merrick said he thought of the need to maintain a ministry that would operate always as a well-oiled machine that would continue through the years to fulfil their commission. “We know from the scriptures that oil is always representative of the Holy Spirit,” Canon Merrick said, “so in a sense we know we must keep a fresh anointing of His spirit operating continually in and through our hearts, our minds and even the members of our body.” “Three of the manifestations of the continual filling of His spirit can be seen in the acronym for the word oil,” the Preacher said, “obedience, integrity and love. And so, my message to Lindsey and Sean, to these warriors to be ordained today, is to be sure to keep your ministry well-oiled with obedience, integrity and love.” “It is easy to obey,” Canon Merrick said, “when that obedience seems reasonable and pleasing to our own understanding and desires – and particularly when it’s found pleasing to those around us. But will we waver when we don’t see the results anticipated, though we still believe this is God’s will?” He shared a remark made by the former US President, John Quincy Adams, whose repeated attempts to have slavery abolished in the 1830s proved fruitless: “Duty is mine, results are God’s.” “Ministry is a call to abide in Him,” Canon Merrick said, “to serve His will and step out in obedient faith, knowing that duty is ours, results are God’s.” Canon Merrick said ministry was also a call to integrity. “We must always be careful not to use people to build His church, but to serve people as He builds His church among us. And in all these things, we must be the same person behind the pulpit as we are when we are at home with the family and when we are alone in the study. That is what characterises the woman or man of integrity.” Ministry was also a call to love, Canon Merrick said. The call to love was not always easy but it always resulted in God’s peace and that was priceless. “My prayer for you this evening,” Canon Merrick told the two ordinands, “is that your work will always be characterised by obedience, integrity and love, as a well-oiled machine continually advancing the Kingdom of God until the coming of the Kingdom.” The choir and choristers of St Columb’s Cathedral provided music for the two-hour long Service of Ordination, after which the congregation made their way to St Augustine’s Parish Hall, on the City Walls, for refreshments and speeches. Reverend Hanily said he and Reverend Farrell needed people’s prayers more than ever now, while Reverend Farrell asked family, friends and parishioners to affirm them both in their ministries. Bishop Good said Derry and Raphoe was blessed to have both new priests joining the Diocese. “We’ve got two stars,” the Bishop said. Pictured above: Rev Lindsey Farrell (left) and Rev Sean Hanily with Bishop Ken Good during the Service of Ordination of Priests at St Columb's Cathedral.
ADVERTISEMENT - CONTINUE READING BELOW