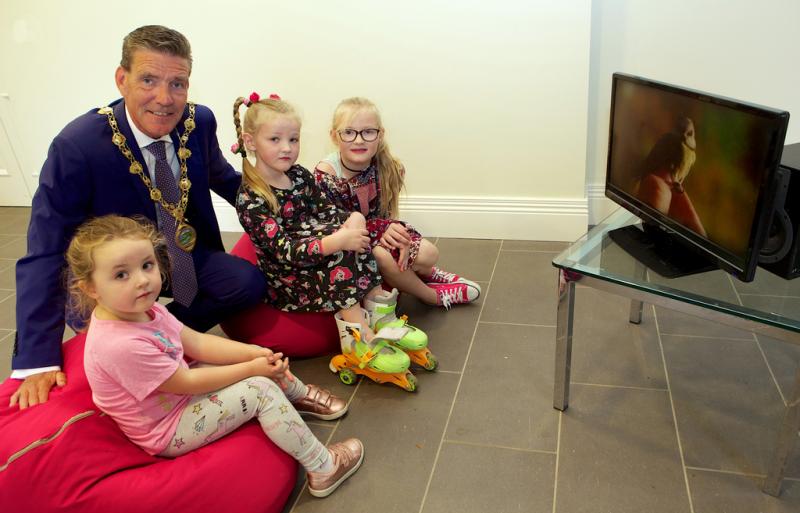 Brooke Park Gatelodge is the latest in a series of unique venues to play host to some fascinating pieces of contemporary public art as part of a visual arts programme with a difference. New Spaces began in July this year with four exhibitions opening in unusual venues across Derry and Sion Mills, and this month the historic Gate Lodge provides a memorable backdrop for one of the programme highlights. Margaret Salmon’s six-minute film Bird will be on view to the public every Saturday from the 1st to the 22 nd September, running from 10am to 5pm. The film is a work that can be appreciated by everyone with a particular focus on children, and in addition to the work in the Gate Lodge, there will be a number of worksheets available for children to colour in and fill out at Gwyn’s Café & Pavilion for the duration of the exhibition. These worksheets are designed to add to the experience of Bird and encourage children to look for many of the birds that feature in the film out in Brooke Park’s trees and shrubs afterwards. Mayor of Derry City and Strabane District Council, Councillor John Boyle, said he was delighted the Gate Lodge at Brooke Park was being used to house the unique exhibition. “The Council is very pleased to be hosting the exhibition in this unique setting. We feel that the work is very fitting for the space and allows us to showcase not only the exhibition but the gate lodge building to a new audience.” Film maker Margaret Salmon works between Kent and New York creating filmic portraits that weave together poetry and ethnography. She won the Max Mara Art Prize for Women in 2006 and her work was shown at the Venice Biennale in 2007 and the Berlin Biennale in 2010. Her work Bird is based on the pioneering films of the Children’s Film Fund producer and director Mary Field - particularly her early ‘Secrets of Nature’ series. Bird is a moving image work that is as much about observation and environment as education and spectatorship. This exhibition also recognises the history of Brooke Park as the former site of an orphanage financed by John Gwyn. Bird is curated by Alice Butler, a writer, film programmer and curator. She is co-director of aemi, a Dublin-based initiative that supports and regularly exhibits artist & experimental moving image work in cinema or event-based settings. Children's worksheets are designed by Ciaran Hickey. New Spaces is coordinated by Visual Artists Ireland, Derry City and Strabane District Council with the support of Principal Funder the Arts Council of Northern Ireland, National Lottery Challenge Fund, Arts and Business Northern Ireland and our partner venues, The Walled City Brewery, Gwyn's Cafe and Pavilion, The Inner City Trust in Derry and Sion Stables in Sion Mills. Pic: Mayor of Derry and Strabane Councillor John Boyle pictured with Grace, Emma Jayne and Amelia Hamilton, at the launch of Bird held in the Gate Lodge, Brooke Park. (Photo - Tom Heaney, nwpresspics)
ADVERTISEMENT
Advertise with Us
ADVERTISEMENT
Advertise with Us
ADVERTISEMENT
Advertise with Us
ADVERTISEMENT
Advertise with Us