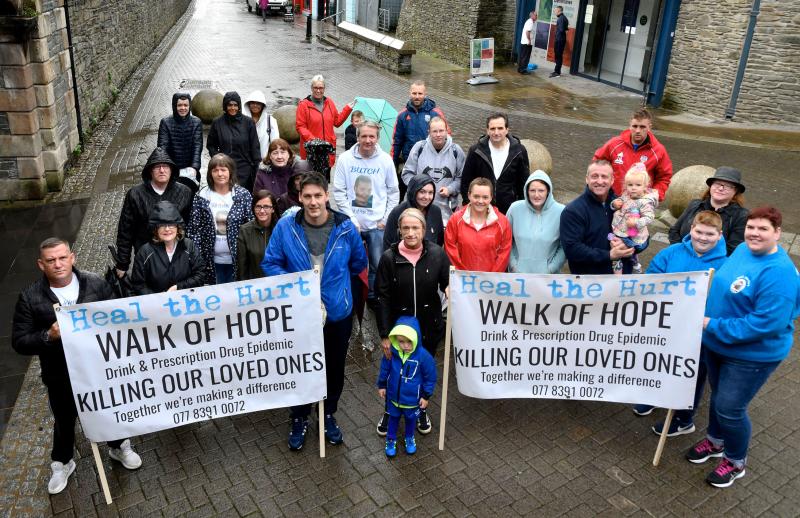 A walk aimed at remembering those who have lost their battle with addiction was held in honour of a Derry man who passed away last year. The ‘Walk of Hope’, organised by Heal the Hurt, took place on Derry’s Walls on Saturday, in remembrance of Terence ‘Butch’ Crawley, who passed away in December 2017. Heal the Hurt, which was founded in 2016 by Derry man Liam Stewart, offers free counselling to those suffering from the effects of alcohol and drug abuse. Speaking to the Derry News, Mr Stewart said Saturday’s walk was also aimed at sending out a message to those suffering from addiction that Heal the Hurt would ‘stand with them’, and help them in their battle. “We wanted to remember every single person who has lost their battle with addiction,” he said. “We also wanted to show families that regardless of the stigma associated with addiction, we will stand with them, and we will be there for them. “There is an epidemic here locally which is taking the lives of our loved ones, and we believe that our city is dealing with a mental health crisis.” Mr Stewart continued that they have moved into a new premise due to increase in demand for their services, which opened its doors on Monday. “The numbers pf people coming to us reached the point where we could no longer cope – there’s simply wasn’t enough space for everyone to fit into the room,” he added. “We’ve now secured a room at Northside Shopping Centre and hopefully we can keep that until Christmas.” He added that in addition to helping those suffering from addiction, Heal the Hurt also provides support to those helping loves ones deal with the substance and alcohol abuse. “We host a ‘Friends and Family’ session on a Wednesday, which is continuing to grow,” he said. “Families are often forgotten about when a loved one has an addiction, and there needs to be a support network there for them too.” You can find out more about Heal the Hurt through the group’s Facebook page, or contact them on 07783910072.
ADVERTISEMENT - CONTINUE READING BELOW