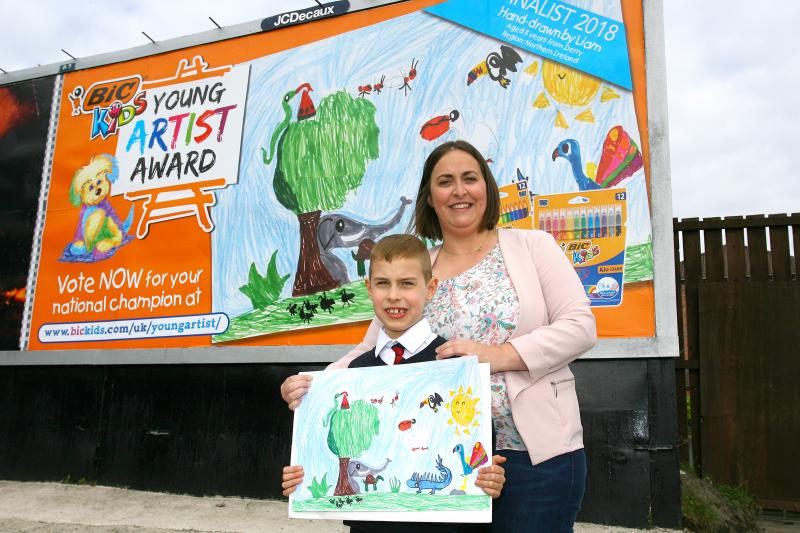 A young Derry boy’s colourful artwork has been selected from almost 1,000 entries to represent Northern Ireland in the 2018 BIC® KIDS Young Artist Award. Holy Child Primary School pupil, Liam Dornan, aged eight, has been crowned the regional finalist for Northern Ireland much to the delight of his proud mum, Senga. His fabulous wildlife scene depicts creatures of land, sea and sky and has been showcased on billboards throughout the North. There were almost 1,000 entries from five to 11-year-olds years throughout the UK and the island of Ireland for this year’s campaign but Liam’s colourful picture stood out to judges and he was chosen as a regional finalist. Liam’s entry has been put forward for a public vote between the other regional finalists up until Sunday, September 9, so the young artist is counting on some local support to help him clinch the top spot. Illustrator Phil Corbett, who sat on the judging panel for this year’s campaign, said: “We’re thrilled to announce Liam as our regional finalist for Northern Ireland. “There’s so much going on in his wildlife scene and we love the detail he’s used, down to a snake eating a watermelon slice at the top of the tree. “Great work! “We hope the billboards being created with Liam’s artwork inspire him to keep on drawing – he certainly has a natural talent for it which we hope he continues to explore. We would encourage the people of Northern Ireland to get behind Liam and cast their vote for this young creative between 27th August and 9th September.” The BIC® KIDS Young Artist Award rewards creativity by taking children’s drawings from the fridge door on to massive public billboards returned in July this year. Regional finalists were chosen via an expert judging panel made up of creatives from the marketing, publishing and illustration industries and they will have their artworks used on 71 billboards across the UK and Republic of Ireland between August 27 and September 9. Liam’s artwork is up against 13 others in the public vote. The public vote is now open at BICKIDS.com/uk/youngartist to decide the overall champion. If the young Derry lad wins, his masterpiece will be used on a further 26 billboards from late September. Be sure to support local lad, Liam, and get voting for him down to a fine art! Pictured above: The impressive young Derry artist, Liam, aged 8, with his proud mum, Senga.
ADVERTISEMENT - CONTINUE READING BELOW