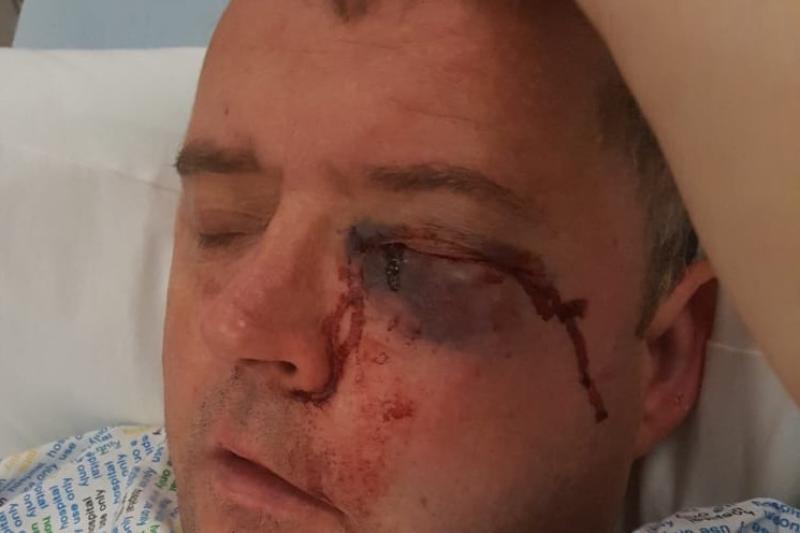 A Derry man has lost sight in one eye following an unprovoked attack as he made his way home from a Celtic match in Glasgow at the weekend. A group of 16 friends from Derry travelled to Scotland for the Celtic versus Rangers match on Sunday. As they made their way to the ferry after the Old Firm Derby they decided to stop off in a popular chip shop where 48-year-old Derry man, Charles Phelan, was attacked. He suffered broken cheekbone a broken eye socket which in turn severed his eye and fractures to his arm and hand. The above picture shows the extent of the injuries Mr Phelan suffered to his eye. His friend, Dermott Logan, made the trip with him and was at a hospital in Ayr yesterday where Charlie was undergoing treatment. Sadly, a doctor has informed the group that Charlie may have permanently lost the vision in one eye as a result of his injuries. Dermott commented: “Charlie was leaving the chip shop when he met a boy who was just hellbent on hitting a Celtic supporter. “Normally we would change out of our clothes before we go back to the boat, but we decided not to because we weren’t planning on stopping off anywhere, all we were going to do was pick up a bag of chips. “We stopped off in the chippy where we normally do in Girvan. “We were in the chip shop, and as we came out Charlie was the very first person out and totally out of the blue, and unprovoked, the guy hit him. “He was dazed and got back up again, not knowing what happened, and the boy just hit him again knocking him unconscious.” Charlie was invited along as a guest of the supporter’s club and they travelled on a mini-bus from Derry to Larne early on Sunday morning where they made their way to, Cairnryan, Scotland. Celtic beat Rangers 1-0 in the first Old Firm game of the new season and the group from Derry thoroughly enjoyed the match. “We were having an absolute ball at the match itself then a couple of our guys stopped off to watch the All-Ireland final,” Dermott added. “We stopped off in Kilmarnock and had a sing-song and a drink after the All-Ireland.” Unconscious It was when they travelled further down the road and stopped off for something to eat before getting the 8pm boat back to Larne where the attack took place. A group of men were on another bus, however, Dermott doesn’t believe they were at the match as it was full of women and children. He explained: “Charlie was literally carrying his fish and chips walking out the door when the guy came running from another bus, there was a 52-seater bus and a group of men, there must’ve been at least a dozen of them. “The guy at the front just ran at Charlie, I happened to turn and looked out the window of the chip shop and seen him level Charlie and as I ran out the door, Charlie was getting up when he was hit again. “He was attacked purely because he was wearing a Celtic top. One of the group responsible was wearing union jack shorts. “I was roaring at them and the guy that hit him was goading me then. “And as Charlie was lying flat out unconscious one of them spat on top of him and made reference to an incident in Sunderland, and said to put a Union Jack pillow underneath him.” Extensive injuries Detailing his friend’s injuries, he added: “They left him with a broken cheekbone, broken eye socket, severed his eye which we’ve just been told he won’t see out of again, so he has been blinded in the left eye. He’s also had his hand and arm fractured. “He was unconscious for over a minute. We thought he had died, and they left him for dead. “The eye consultant said he won’t know for a year if he’ll have any vision at all, it doesn’t seem likely, and in his words he said to ‘pray for a miracle’. Charlie’s partner and family were immediately notified about the news and are anxious to have him back in Derry where they can look after him. Medical professionals were deciding whether he would be transferred to Derry or Kilmarnock for reconstructive surgery to his face. “There’s a specialist in Kilmarnock, so we don’t know if we’re going there or if he’ll be transferred to a hospital back home.” Scottish police confirmed the attack and said ‘enquiries are ongoing’. A spokesperson said: “Around 6.50 pm on Sunday 2 September 2018 police were called to a report of a 48 year-old man having been assaulted at a takeaway on Bridge Street in Girvan. “Officers attended and the 48-year-old man was taken to Ayr Hospital to be treated for injuries to his eye. “Enquiries are ongoing.”
ADVERTISEMENT - CONTINUE READING BELOW