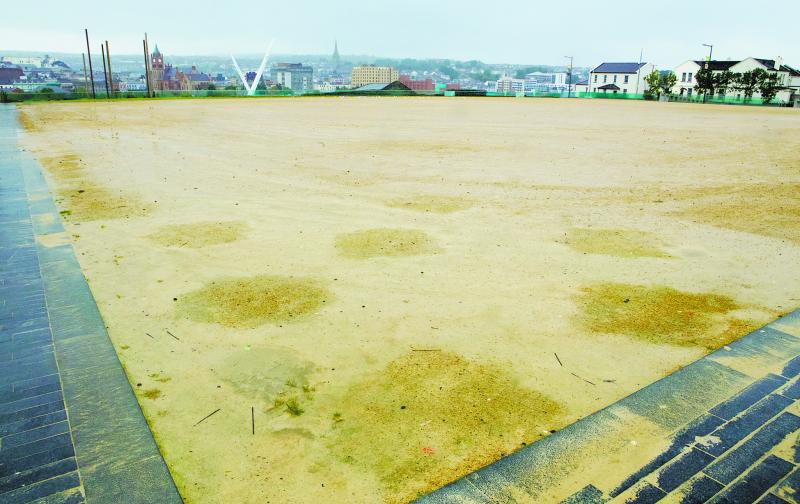 A decision to resurface the parade ground at Ebrington Square in Derry has been delayed after local councillors and a promoter raised concerns over the move. The planning application came before a meeting of Derry City and Strabane District Council’s Planning Committee yesterday in Strabane. It proposed removing the current ‘loose gravel’ surface which has been problematic over the years and replacing it with exposed concrete and grass. The new-look parade ground at Ebrington Square was first opened in 2012 and formed a key part of the regeneration of the former Army Barracks in the Waterside. Since then, the site has hosted a number of major events, including BBC Radio 1’s One Big Weekend event during the City of Culture Celebrations in 2013, and the Club MTV event last September. The site is also used by locally based promotions for outdoor dance and music events. However, concerns were raised about the surface of Ebrington Square during and after such large-scale events, and particularly the effect of rain on the sand-like surface. The current owners of the site, The Executive Office considered a number of options aimed at improving the surface and it was decided that the exposed aggregate concrete was most suitable. However, at yesterday’s meeting several councillors agreed that the current gravel surface was ‘not fit for purpose’ and SDLP councillor Gus Hastings said he would like to see the continued use of the site as a multi-purpose area for concerts. If resurfacing meant that would not happen he said he was opposed to the idea. Head of Planning with Council, Maura Fox, said the new surface would improve the area and make it a more suitable venue for concerts. The meeting then heard from a local promoter, Robert Allen, who voiced his concerns that resin which would be poured over the concrete for aesthetic reasons would be a ‘problem’ and ‘it wouldn’t be fit for purpose’. Mr Allen said he had been told that lorries wouldn’t be able to park on the exposed aggregate concrete surface which would cause difficulties for those running events. He added that it had to be done right on this occasion, otherwise more money would be spent down the line resurfacing the area again. Sinn Féin councillor Patricia Logue sought clarification on the matter and said she would like evidence to show that ‘heavy goods vehicles would damage that material’. The DUP’s Hilary McClintock proposed deferring until further information could be provided and that was seconded by Cllr Hastings. The decision was supported by the other councillors in attendance.
ADVERTISEMENT - CONTINUE READING BELOW