Doing it for the kids! Youth events to be at centre of Derry's Culture Night celebrations 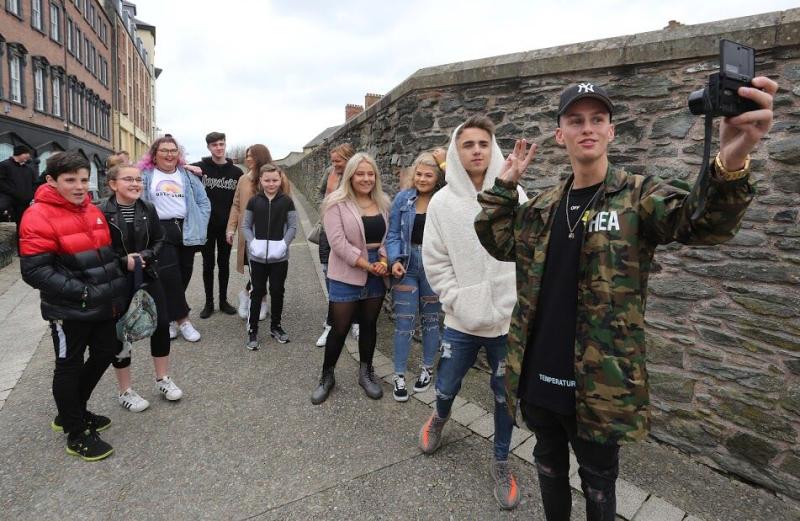 Young people are set to be at the heart of culture tasting event in Derry which has 'glam squad' makeovers, comic book characters, retro gaming events and even its own hashtag.

Culture Night 2018 is when arts and cultural organisations across Ireland open their doors in celebration inviting the wider public to experience some of their local culture. This year’s event is scheduled to take place on Friday 19 September with an extensive programme of events to celebrate the local visual arts, music, theatre, dance, heritage and cultural offering.

This year, a particular emphasis has been placed on offering events for children, young people and families ahead of the Council’s Youth 19 celebrations, a year dedicated to young people aged 12-24.

Clare Lynch, Children and Young Persons Coordinator with Derry City and Strabane District Council said she is delighted that this there is a strong focus on youth during this year’s celebrations and is looking forward to seeing young people from across the city and district getting involved and being part of the cultural showcase.

She said: “This is a fantastic event and a great way for us to work towards a Child Friendly Community. It provides a platform for young people to meet new people from across the District, showcase their talents and to be recognised for the fantastic contribution which young people make to our communities every day.

"It’s great to have so many different opportunities for our young people to take part in, that’s exactly how they develop an interest and passion for their community.

"We will be increasing the amount of opportunities for young people to get involved and take a leading role in their communities during Youth 19 and this event provides a great platform as we work towards announcing the details of our exciting Youth 19 programme.”

Among the key youth highlights of the city and district’s 19 September celebrations will be the Culture Night Youth Takeover at the Nerve Centre when young people from across the city and district will take part in a packed programme of original new music, film and digital fabrication for young people, produced, programmed and presented by the city own youth talent from 6-11pm. More information is available at www.nervecentre.org

Young stylists from Rutledge will bring “flair to hair” for audiences goers as young performers showcase their talents at the Open Mic and Glam Squad event at Our Space in Waterloo Place from 7-10pm while local musicians in the Strabane area are encouraged to take part in the Pulse Music Trail taking place at Castle Street from 5-8pm.

Young people interested in meeting some of their favourite comic characters are invited along to listen to stories from comic book legends at the Angry Cherry Shop, Foyle Street from 6 to 9.30pm.

Young People from OUT North West and Simply Youth in partnership with Street Talks will take to the city centre to showcase their 'This is Us' project. Twelve young people who identify as LGBTQ+ used photography, film and spoken word to explore their own identify, highlight issues and raise awareness of the harassment and victimisation against LGBQ.

Gamers are also catered for on Culture Night with a special Retro Gaming event taking place at the Hive Studios at Rath Mor in Creggan from 5-8pm. There will be everything from school platform classics like Super Mario Brothers to Sega classics such as Sonic, to enjoy.

Other young people and child friendly highlights at this year’s celebrations is a performance by the Astronomic Weather Choir at Walker’s Plinth on the city’s walls and a performance from children from the Outer West Neighbourhood Renewal Area where they will enact the true story of Jimmy Allieander, the 7.6 foot ‘Giant of Brooke Park’.

The Verbal Arts Centre is also focusing on youth and is organising a drop in event from 6-9pm entitled ‘Once upon a time’ where young people can sample interactive storytelling and performance sessions including a collaborative writing programme featuring favourite book characters, a series of flash fiction storytelling sessions, a performance from In Your Space’s Youth Circus Troupe and a demonstration of a technical production known as Chroma-Keying that is used in films, weather reports and the news.

The Guildhall will play host to the Commissioner’s Cape, from 4-8pm, where young people and children will be invited by the NI Children’s Commission to help raise awareness about children and young person’s rights through creative colouring. It will also host the NI Science Festival’s Exploration Dome with its state of the art mobile planetarium using 3D digital projection technology.

In addition to all of this, a number of cafes and shops in Derry city centre and in and around Strabane’s Castle Street will remain open on the evening of Culture Night to offer refreshments and entertainment as the public make their way around the venues and Cappuccinos Café in Foyle Street will be treating patrons with their comic monologue ‘Waiting Tables for Godot’.

The full programme for Culture Night 2018 is available to view at www.derrystrabane.com/culturenight.

The public can follow the action and share their own experiences on social media using the hashtag #CultureNightDS.

Picture: Local young people pictured at the Nerve Centre where you can witness a one of a kind live recording session where three local young bands will record two original tracks each, crafting a record in the flesh from 6pm - 9pm on Culture Night.
ADVERTISEMENT - CONTINUE READING BELOW