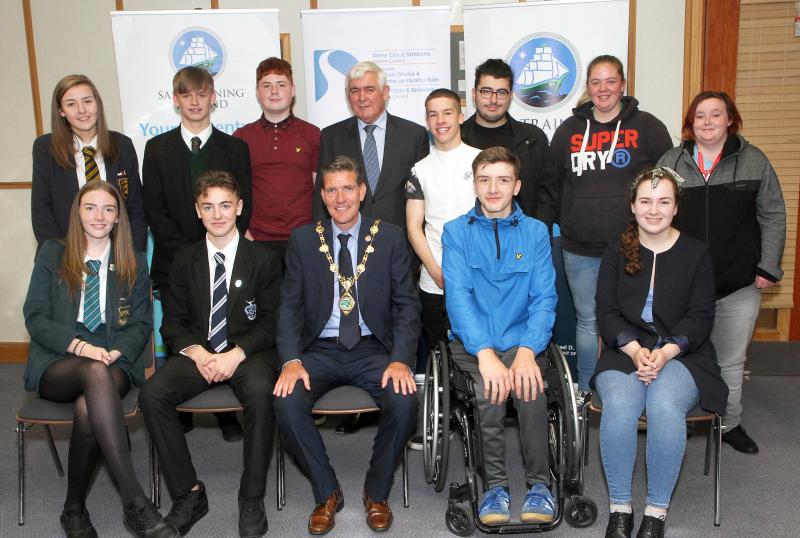 The Mayor of Derry City and Strabane District Council, Cllr John Boyle, has presented certificates to young people from the North West who took part in a life-changing sea voyage between Derry and Belfast as part of this year’s Foyle Maritime Festival. The voyage was part of the ‘Foyle Sail Training Programme’ under the guidance of Sail Training Ireland – which has been organising and co-ordinating sail training voyages since its foundation in 2011. Voyage One – for the 15–17 year-old age group – commenced on the 15th July 2018 in the Titanic Quarter Belfast and arrived in Derry on 21st July. Voyage Two, with a crew of 18–30 year olds, departed the following day, Sunday July 22nd to make the return journey to Belfast. The two voyages lasted six days each – and equipped participants with life-changing skills aboard the vessel ‘Brian Boru’. Derry City and Strabane District Council funded 10 places in total for the voyages with a contribution from the Loughs Agency – 5 places from the 15–17 year-old age group and 5 from the 18–30 age group. Pictured above: The Mayor Councillor John Boyle presents certificates to young people who completed a 6-day Foyle Sail Training voyage on board the vessel ‘Brian Boru’ as part of this year’s Foyle Maritime Festival. The event was organised by Sail Training Ireland in conjunction with Derry City and Strabane District Council, Belfast City Council and the Loughs Agency. Included standing (centre), is Seamus McLoughlin, Chairman of Sail Training Ireland.
ADVERTISEMENT - CONTINUE READING BELOW