Cultural TV show to showcase the Walled City of Derry with more than 200,000 French and German viewers expected to tune in 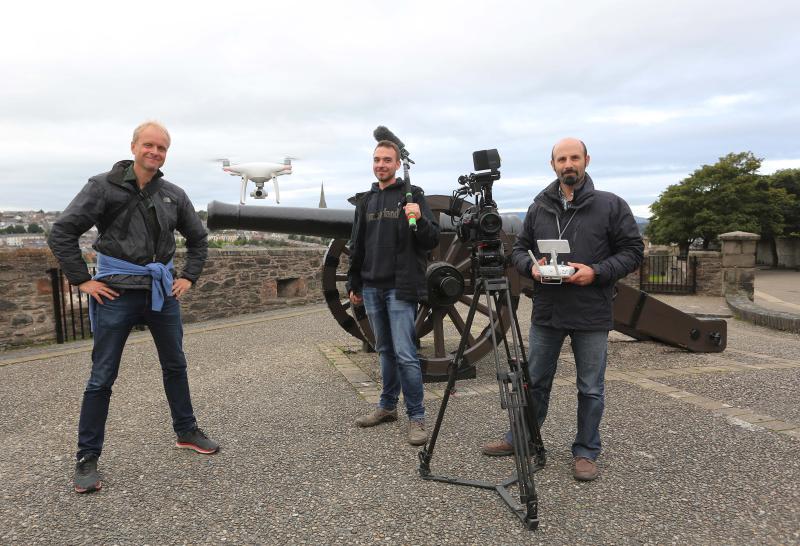 A TV crew from Arte, a Franco-German TV channel focusing on culture and the arts, has been filming in Derry for its Metropolis programme, a culture magazine show, and over 20,000 French and German viewers are expected to tune in. Arte were invited here by Tourism Ireland, in conjunction with Tourism NI and Visit Derry, to film Metropolis and Director, Martin Rosefeldtl, and two crew members spent four days in the city filming the historic walls, Museum of Free Derry, the Peace Bridge, Tower Museum and the Walled City Brewery. The resulting programme will air next month to an audience of more than 200,000 German and French viewers, or potential holidaymakers interested in visiting destinations with a rich culture. “Tourism Ireland was delighted to invite this TV programme to film in Northern Ireland,” said Zoë Redmond, Tourism Ireland’s Manager Central Europe. “Viewers of this show are interested in finding out about new and interesting destinations and Derry is the perfect fit for them. With an audience of over 200,000 viewers, it’s a fantastic opportunity to showcase the city and what’s on offer here for German and French holidaymakers.” Tourism Ireland is rolling out an extensive programme of promotions in Mainland Europe this autumn, to grow business in the shoulder and off-season months and to position us well for 2019. The multi-media campaign includes radio and online advertising, trade and consumer shows, B2B workshops, co-operative promotions with key airline, ferry and tour operator partners, as well as a busy programme of publicity and social media promotions. Pictured above: Martin Rosefeldt, director; Ion Casado, sound; and Max Mueller, cameraman from European TV show Arte, filming on Derry’s historic walls.
ADVERTISEMENT - CONTINUE READING BELOW