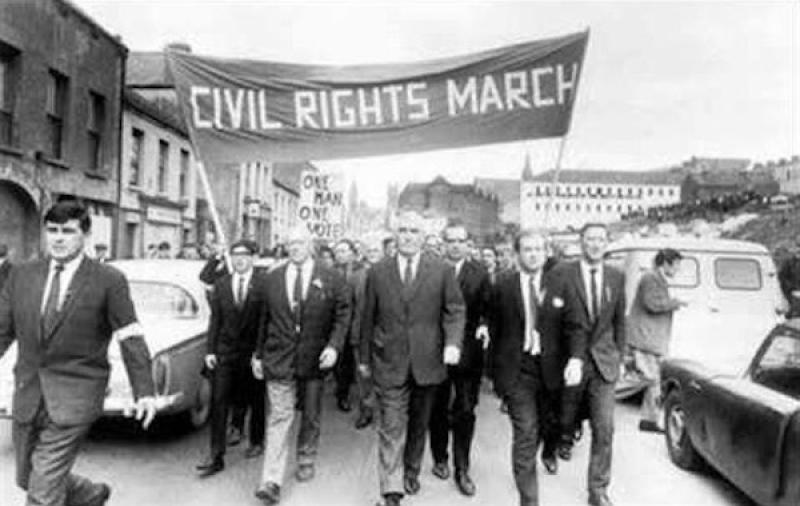 Local schools will be part of a special event next month commemorating 50 years since the Civil Rights movement first began its official campaign of action on the streets of Derry with the Duke Street March. On October 5th young people will gather in the Guildhall to find out more about one of the most significant days in local history, with a full programme of activities planned to mark the anniversary. The march, which was organised by Derry Housing Action Committee in association with NICRA, changed the face of the Civil Rights Movement across Northern Ireland. The media captured the events of the day relaying it to a mass audience via TV and radio, and subsequently it became known as the day the Troubles began. The event is being held as part of the Speeches Strikes and Struggles series which has been running throughout the year, led by Derry City and Strabane District Council and supported by the Esmee Fairbairn Collections Fund. The programme aims to open archive materials up to new audiences and offer a variety of perspectives on what was an immensely significant era. Speaking ahead of the event, Mayor of Derry City and Strabane District, Councillor John Boyle, said it would provide a unique opportunity to hear first-hand accounts from some of the people who led the civil rights campaign. “The Duke Street March changed the course of local history by initiating a movement against the civil oppression which had affected the lives of so many people across N. Ireland. People took to the streets to demonstrate that they were not prepared to accept the ongoing violation of their civil rights which had become the accepted way of life here. “50 years on we live in a very different society thanks to the actions of those who were prepared to stand up against oppression. This is a great chance to hear from some of the veteran leaders of that movement and their first-hand accounts of what actually happened on that day.” On the day young people will have the opportunity to put their questions to a special panel made up of Civil Rights veteran Eamonn McCann, Aidan McKinney and Anne Devlin. And there will be workshops throughout the day led by leading academics including Dr Chris Reynolds presenting on his Voices of ’68 exhibition and Dr Brendan Lynn exploring the CAIN archives, Ulster University. Speeches Strikes and Struggles Project Officer with Council, Emma McGarrity, said: “We are delighted to be hosting this schools event marking the 50th anniversary of the Duke Street march. It will give young people the chance to hear first-hand how the events of that day snowballed into a campaign which entirely changed the shape of society here. “Pupils will also be among the first visitors to the newly opened Speeches, Strikes and Struggles: Curating Conflict exhibition at the Nerve Visual Building in Ebrington, which charts this time and the years that followed in a collection of fascinating artefacts, hopefully offering a new perspective on the events they read about in their history books.” The school event will launch a whole weekend of commemorative events including a special concert Songs of Civil Rights on Friday evening, and a two-day conference featuring a keynote speech by President Michael D Higgins and contributions from leading civil rights figures including Eamonn McCann and Ivan Cooper. During the conference leading human rights proponents Michael Mansfield QC, Gareth Pearce, Baroness Nuala O’Loan and Lord Alf Dubs will discuss key issues such as The British State, NI and the delivery of Civil and Human Rights: lessons and learnings. To enquire about the schools conference, e-mail emma.mcgarrity@derrystrabane.com or call Emma at the Tower Museum on 028 71372411. To see the full programme for the Civil Rights Festival go to www.nicivilrights.org/events/civil-rights-festival
ADVERTISEMENT - CONTINUE READING BELOW