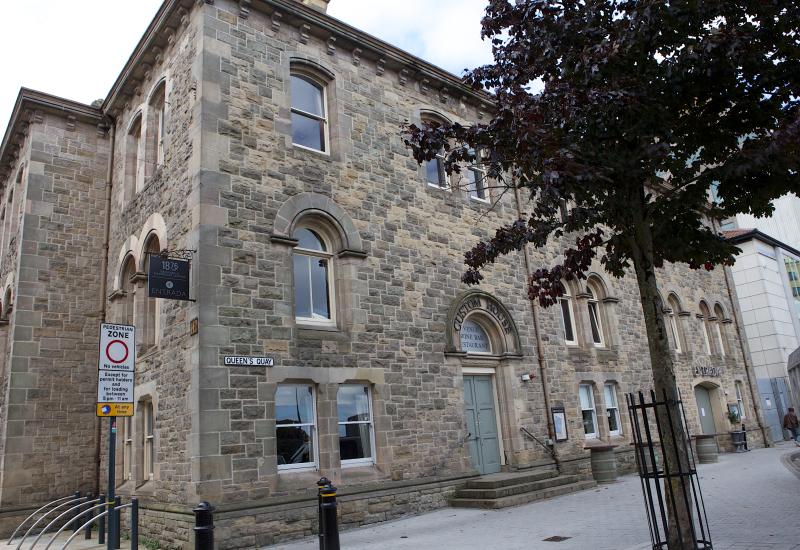 DERRY councillors have voted to overturn a planning decision which would have seen the owners of a restaurant in the city centre banned from erecting a shelter at the front of the premises. The application came before the September meeting of Derry City and Strabane District Council’s Planning Committee seeking approval for the installation of three external retractable awnings to part of the front façade of the Custom House building at Custom House Street in Derry, pictured above. Speaking at the meeting, a planning officer said that advice had been received from the Historic Environment Division (HED) that the installation would have an ‘adverse affect’ on a number of listed buildings within the area, including Custom House, the Harbour Commissioners Office, Harbour Square and The Guildhall. The meeting was told that the HED were of the opinion that the proposal would result in ‘unnecessary damage’ to the historic structure. The officer added that while the plans before them had been amended from a previous application, the awnings would still ‘obscure the windows to a certain extent and remain inappropriate on a building of this style and character’. The meeting head that a precedent had been set by the nearby Guildhall Taphouse bar, formerly the Monico Bar, another listed building which mow has an awning over a seated area. However, the Historic Environment Division said the building was ‘of a different style’. The planning officer advised local councillors refuse the application on grounds that the proposal is ‘unacceptable’ as it would have an adverse effect on the character of Custom House and the setting of the surrounding listed buildings. The meeting then heard from a representative of the applicant, Kular Fashions, who said that the contractor chosen to carry out the work are the ‘best in the UK’ and would carry out the work in a ‘delicate’ manner which would have ‘no impact on the structure itself’. He added that the awning would bring ‘life and people’ into the space and said buildings are ‘not antiques’ and should be ‘inhabitable’ whether it is sunny or raining. The applicant also assured councillors that the awning would not contain any advertising. DUP Alderman Hilary McClintock said there are a ‘strong trio’ of buildings in the area and she didn’t want to interfere with their architectural integrity. Councillor Dan Kelly, of Sinn Féin, said the awnings would provide shelter for street entertainment and believed that tables on the streets was part of the ‘direction of travel’ in the city. Head of Planning with council, Maura Fox, said it is a ‘balancing act’ and she was ‘very much in favour of retaining listed buildings’. SDLP councillor Tina Gardiner said she would be supportive of the awning if it was ‘tasteful’ and made reference to their widespread use on historic buildings in London. Using the Guildhall Taphouse as an example, she said it made the space visible and attracts ‘life and vitality’. Meanwhile, Sinn Féin Cllr Patricia Logue said, the buildings may become ‘vacant and derelict’, but agreed that they should contain ‘no advertising’. However, the SDLP’s Gus Hastings believed awnings didn’t serve much purpose and would only encourage ‘outside smoking’ and therefore wouldn’t be supporting it. Eleven councillors voted in favour of the awnings and two against, meaning the advice of planning officers was ‘overturned’. The meeting was told that the matter would come back before the council next month.
ADVERTISEMENT - CONTINUE READING BELOW