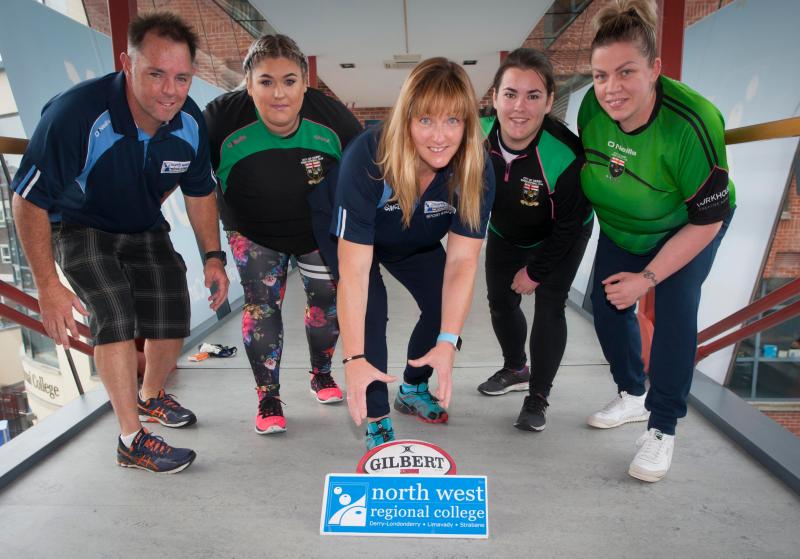 A sports lecturer based at the North West Regional College (NWRC) in Derry has said that age should never be a barrier to sport after she was selected for the Ulster Ladies Rugby team. Michelle Gormley McLaughlin, who coordinates the Level 2 Diploma in Sport course at NWRC, will now represent the squad at the Interprovincial Championships. Speaking after receiving the call-up, Michelle, who is 47, said it took her ‘completely by surprise’. And the local lecturer added that she hopes her example will not only show that age should never be a barrier to sport, but also encourage her sports students at Strand Road, and other women in the North West to have a go at rugby. “I played my first rugby match on my 40th birthday,” she said, “having previously played Camogie and Gaelic”. “The call-up took me completely by surprise because I wasn’t expecting it, but I’ve done all the training which meant going to Portadown every Wednesday night. “I had lots to learn, being thrown in at the deep end and I had to get to know the rest of the team”. Michelle added that she had found the experience of playing for Ulster ‘fantastic’. “It has been fantastic though and I started off playing a friendly against Connaught where I got on to play for a full half. And on Sunday I made my official debut for Ulster against Munster.” She added that having been one of the first people to enrol in the sports course at the NWRC, her recent success would inspire others to look at a similar career. “I love encouraging young people, and I think it’s good that as well as teaching sports to the young people they see me out there doing it,” she said. “I believe it adds value to my teaching and keeps it current and to the point. “I was one of the first students to ever take a course in sport at NWRC when they first introduced the subject at the college exactly 30 years ago. “It was a brilliant course and the place where I was introduced to outdoor education. “Since then I’ve watched hundreds of students go on to teach sport, travel the world, open their own gym, and much more. It’s always great to hear of the successes.” NWRC Lecturer Michelle Gormley McLaughlin (middkle) gets some encouragement from Joe Gallanagh, Sports Lecturer, City of Derry Rugby Team members: Sarah McKittrick, Charlene Rodgers and Nicola Duddy.
ADVERTISEMENT
Advertise with Us
ADVERTISEMENT
Advertise with Us
ADVERTISEMENT
Advertise with Us
ADVERTISEMENT
Advertise with Us

The Graham Norton Show is back! Here's the guests for tonight's season premiere on BBC One