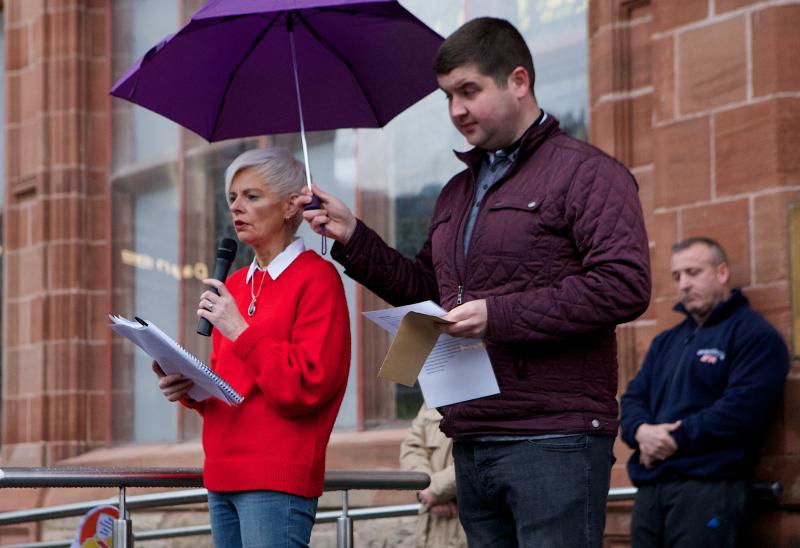 A Derry woman whose son took his own life has told a rally that a suicide prevention task force must now be set up to properly address the issue in the city. A large crowd gathered at the Guildhall on Monday to mark World Suicide Prevention Day where speakers addressed a ‘suicide epidemic’ gripping Derry and offered support to anyone suffering. The rally saw people directly affected by suicide and others desperate to end ‘stigma’ around mental health voiced their concerns and searched for solutions. Gary Clarke, who is responsible for Messages of Hope on the bridges, introduced various speakers including Anna Marie Toland, who has been vocal about the need for a 24-hour crisis centre and is one of the founders of SOLID (Save Our Lives In Derry) and Lorraine Curran, who lost her son to suicide, pictured above with Mr Clarke. Lorraine, a paediatric nurse in Altnagelvin Hospital, lost her son Mark McCann in 2005, just two years before his close friend, Conor Carlyle, also took his own life. Since Mark’s death, from 2005 until 2016, there have been 444 suicides in the local area. She said that for every person who dies from suicide there are ‘60 people impacted by that tragic loss’, meaning around 27,000 people were affected by those deaths. Lorraine told those gathered that if there have been 444 suicides in eleven years and thousands suffering in the aftermath then that should be classified as an ‘epidemic’. “Mark’s death to me is a very personal and emotive subject and questions do remain unanswered,” she said. “Feelings of strain or distress that you have done something wrong or didn’t do enough, feelings of shame because of the way other people talk about suicide and the stigma that still persists in our society.” She also spoke of how suicide affects people in different ways. “In truth, the person who dies is the only one who knew why it felt impossible to live,” Lorraine added. “We must also bear in mind that the specific circumstances of everyone who becomes suicidal are unique. “Early intervention for positive mental health and wider measures to improve our quality of life are undoubtedly part of the long-term answer. “We need to address underlying issues that contribute to the increased risk of suicide in communities, such as alcohol, drug misuse, unemployment, existing mental illness, low educational attainment and the impact of the Troubles.” Lorraine said ‘normalising’ the conversation around emotional wellbeing could be a ‘game changer’ and ‘give us strength to move forward’. Training is also needed for healthcare providers in all areas but she was concerned that suicide doesn’t seem to be the ‘main concern in policy planning’. “We need to provide services to target the resources most effectively,” she continued. “There needs to be a holistic approach and combined effort from all disciplines - an urgent suicide prevention task force. “It is imperative for the restoration of the Assembly that the Protect Life 2 document needs to be endorsed. “It has been sitting this last three and a half years at Stormont gathering dust. “And it isn’t just about money being pumped into the service, the statistics speak for themselves, we can’t measure how many suicides have been prevented by the people who work tirelessly towards suicide prevention. “The excellent services we have in our city strive on a daily basis to help prevent suicide, but it doesn’t appear to be enough.” She added that more services are needed locally to address the ‘underlying problems’ which can lead to self-harm or suicide. “We need to identify the underlying problems and provide services to deal with them,” she added. “We need a whole package of care, prevention is better than cure. “And we need the right people, with the right training, in the right places, at the right time. “And not between 9am and 5pm. “All I have is my experience, I’ve been humbled to be involved, I’m honoured, I’m saddened, I’m frustrated, I’m discouraged and yet hopeful. “I pray that something can be done to prevent other families having my experience. “We need a little less conversation and a little more action.” Representatives from AWARE, Me4Mental and Heal the Hurt spoke about issues of mental health and addiction which lead to suicide and invited anyone who is suffering to speak to them. Anna Marie said she initially spoke out to ask what we could do to stop ‘our young people’ taking their own lives and from their SOLID was formed with the backing of other people. “We need to save lives by any means that we can.” She added that progress is being made in ‘small steps’ and she wanted the ‘young and vulnerable in our city to know that we are not going away, we are not giving up and are going to continue to shout.’
ADVERTISEMENT - CONTINUE READING BELOW