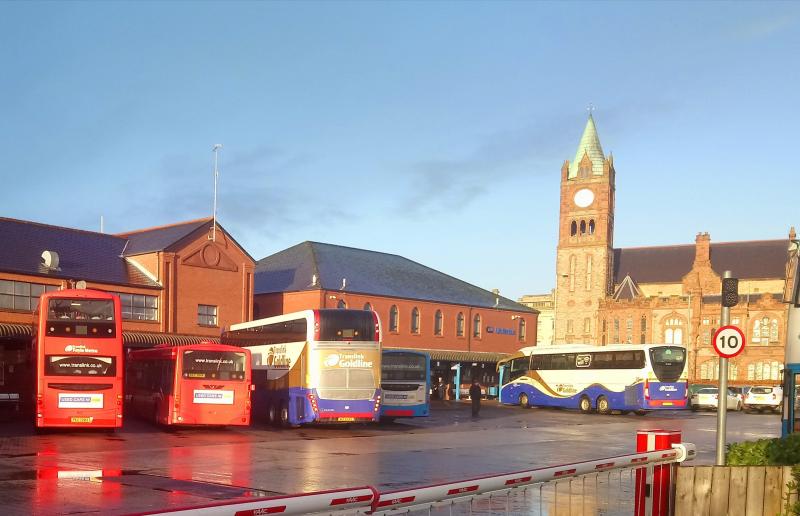 TRANSLINK is planning to upgrade the bus depot at Foyle Street in Derry in order to address what it describes as ‘health and safety’ issues at the site. The plans, which have been lodged with Derry City and Strabane District Council, would see a number of improvement carried out at the depot, including re-surfacing works, replacement lighting, and new lighting columns. In the application, Translink state that the upgrade works are aimed at ‘addressing a number of current health & safety issues within the depot’, and will also see parking lining, pedestrian lining and a new fence. The works, if approved, will also see the replacement of the current vehicle access barriers and the installation of new bollards. The plans mark the latest move from Translink which is aimed at improving health and safety at the depot. In February of this year, the Derry News revealed that passengers were no longer be able to flag down buses once the vehicle is in motion due to safety concerns. Translink said that it was introducing the new measure as the ‘safety of its passengers and staff is our main priority’. It now means that passengers cannot enter the ‘bus operational area’, and drivers no longer can allow people to board in the bus yard after it has reversed back from the stand. Commenting, the SDLP Foyle MLA Mark H Durkan welcomed the plans for the upgade. “The bus depot in Foyle Street is the first point of contact for many people arriving into the city, and it’s vital that we have a facility that best reflects our city, because as we all know, first impressions last,” he said. The upgrade plans are currently being considered by the local council and will come before a furture meeting of its Planning Committee.
ADVERTISEMENT - CONTINUE READING BELOW