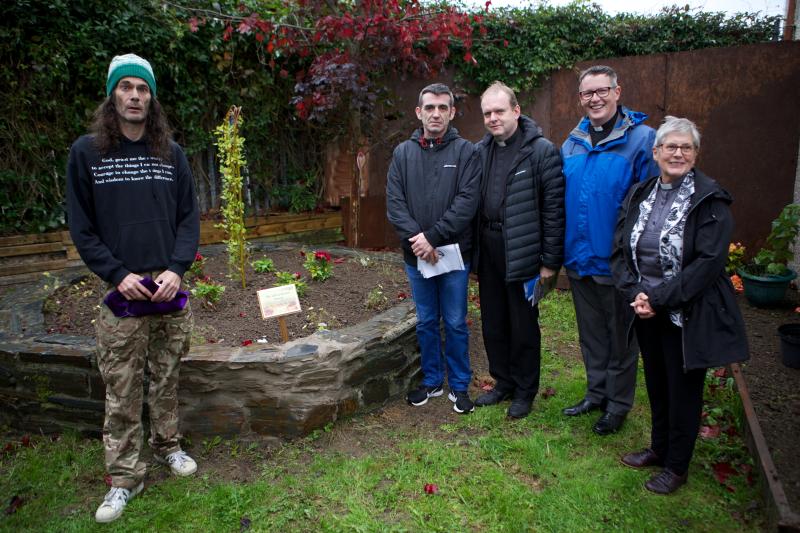 A ceremony was held in Derry earlier this week for the opening of a garden of remembrance for those who have taken their own lives. People assembled at the Creggan Community Collective at Cromore Gardens last week to officially open the garden for those who have lost their lives to suicide. The Creggan Men’s Group planted a weeping willow tree alongside a plaque which read: “We will be known forever by the tracks we leave.” There was a moment of silence for those who have passed away and people gathered, many of whom have been deeply affected by suicide, took time to reflect on their own loved ones. Cross-community support was shown for the event by Reverend Katie McAteer and Rev. Robert Miller from Christ Church and Father Joseph Gormley from St. Mary’s in Creggan. Speaking after the ceremony, Rev. McAteer said she was invited along because she represents a church, but wanted people to ‘know that just because she’s dressed up as a priest, that shouldn’t be a barrier to people.’ “I want to walk the walk with them and let them know that the church is open to them,” she added. Meanwhile, Father Gormley said suicide is something that affects everybody and recognised that most families in Derry have been ‘affected by suicide in some way’. “As ministers of churches we are called into the situation when it arises, we don’t come with answers, we first of all come to listen to the pain. But we also come with the person, Jesus Christ, who shares everybody’s pain and we want to make people aware of that. He lived the pain they’re carrying on the cross for them.” They both encouraged those suffering from mental ill-health to speak to people who will be non-judgemental. Ppictured at the unveiling of a plaque and tree planting at the Creggan Community Collective, to mark suicide awareness, are, from left, are Ben and Liam, Creggan Men's Group. Also included, from right are Rev. Katie McAteer, Rev. Robert Miller and Fr. Joe Gormley. (Photo - Tom Heaney, nwpresspics)
ADVERTISEMENT - CONTINUE READING BELOW