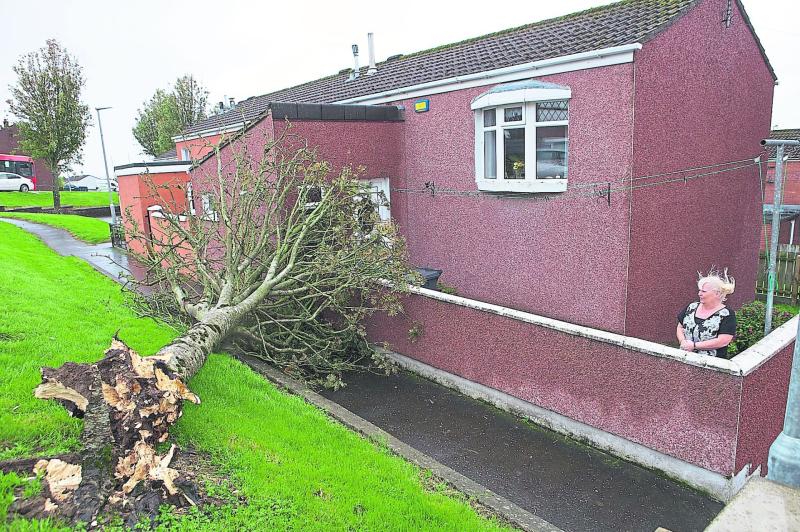 School children could have been killed after a tree was blown down in a Derry street during yesterday’s severe weather, it’s been claimed. Homes have been damaged and substantial disruption caused as Storm Ali blew through Derry with 90mph winds. An amber warning was issued on Tuesday evening and Ali, the first named storm of the season, arrived in time for the morning rush-hour on Wednesday. Yesterday, Derry City and Strabane District Council closed all of its parks and cemeteries ‘until further notice’ and the Foyle Bridge was closed to all traffic. The strong winds blew debris onto roads and in areas such as Glenowen serious damage was caused after trees were uprooted. Celina Ball has lived in Glenowen Park for almost thirty-five years and in recent bad weather her fence was blown down. Following that incident, she asked for a tree, which was planted in a grass area in front of her house, to be removed. However, she was told that it wasn’t possible and on Wednesday morning the very same tree came crashing down, hitting the wall at the front of her house and blocking her front door, pictured above. “I was in the bathroom and I heard the crash,” she told the Derry News. “I thought it was the hanging baskets that blew off and hit the door but I went out and the tree was lying there. “There are lots of people who walk past to go to the shop and school children could have been walking past this morning. Someone could’ve been badly injured or even killed. “If it had fallen at 9am or before 9am then some of the wains would’ve been walking past on their way to school.” She added: “It was during that big gust and it came down quick. “But we’re lucky it didn’t happen and there’s no damage to the house thankfully. “It just missed the window and the way it fell the wall took the brunt of it.” Late yesterday morning she was still waiting for Apex workers to remove and dispose of the tree. She suggested that Apex and whoever else is responsible for maintenance in the area, should now be proactive in their efforts to minimise the potential of any further damage by removing or maintaining the rest of the trees. Other houses in Glenowen were impacted by a large fallen tree which they said came from of Creggan Country Park - an area situated behind their homes. It destroyed a shed in Marie Stillman’s back garden and damaged part of her fence. She commented: “I heard a twisting kind of sound and a crack but it didn’t actually make much of a smash when it came down. “The shed roof is a write-off and there was a lot of electronic equipment and other stuff inside it. The same tree also fell against her neighbour’s home, Danny Hutton, and he expressed his frustration that it tree hadn’t been cut down sooner. He explained how the tree damaged guttering and said it was proving hard to get through to NI Direct for any sort of assistance. “There could have been a fatality here, it’s very lucky that nobody was injured but nobody seems to care about it. “I’m lucky it fell against the house and that I’m not injured,” he said. A spokesperson for Derry City and Strabane District Council confirmed that Council’s environment team has been out and about during the day providing assistance where needed in terms of dealing with fallen trees, leaf matter and debris. “Checks will now be carried out at all relevant Council sites before they are reopened to the public and in any green areas maintained by Council.” Elsewhere in the city, the Foyle Bridge was also closed to traffic for most of the day, a tree which was blown down on Derry’s Walls damaged church railings and a fence facing onto the Springtown Road was toppled. The Northern Ireland Fire and Rescue Service and PSNI had safety cordons in place on Waterloo Street while they removed loose tiles and slates from two buildings. Firefighters also secured a large section of fence which had blown free at a retail park on the Buncrana Road. The local council encouraged the public to return their bins to a safe place after collection, however, brown food caddies were blown out of streets and on to main roads around the city.
ADVERTISEMENT - CONTINUE READING BELOW