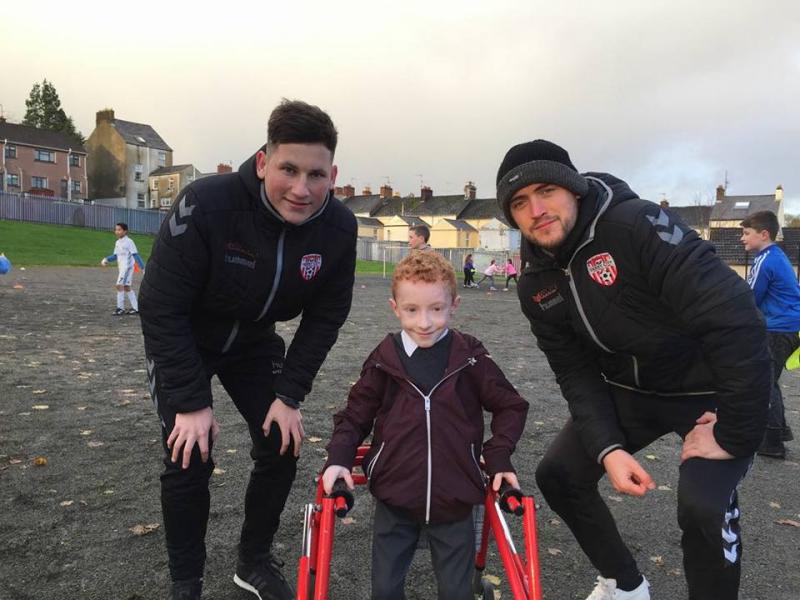 The Ryan McBride Foundation has been awarded £10,000 of National Lottery funding to help young people in Derry to reach their potential and improve their health and well-being. The foundation received the £10,000 grant through Big Lottery Fund’s Awards for All programme. They are using the funding to run a year-long football programme with workshops to improve mental health and wellbeing in schools across the city. Derry City Football Club players have volunteered to help coach the young people. The Foundation was set up in remembrance of former Derry City football captain, Ryan McBride who passed away suddenly in March 2017. Ryan’s sister and board member of the foundation, Caitlin McBride said: “Ryan was passionate about working with young people, and going into local schools was a big part of his life, so for us to be able to carry on his work through the foundation is amazing. This project is something he would’ve been part of if he was here so I’m proud that we are improving young peoples’ lives in his name. “Sport brings a lot of joy to young people, it’s a chance for them to interact with other children, make new friends and improve their wellbeing. But it can be expensive, so for us to reach young people and provide our programme for free means parents don’t need to worry about paying for it. “We’re so grateful to receive this funding from Big Lottery Fund, it’s a massive boost for us.” Watch here to hear Caitlin McBride, the late Ryan's sister, thank the National Lottery customers for making the donation possible: https://youtu.be/jcB6AekMzRQ The foundation has a lot of support from the local community and in the last few weeks it was announced that councillors on Derry City and Strabane District Council have voted to rename Brandywell Stadium after Ryan McBride. Next door to the stadium local football supporter Gary Harkin, owner of Harkins Todays newsagents and National Lottery retailer welcomed the news of a project on his doorstep receiving funding. Gary said: “We sell hundreds of National Lottery tickets every week and it’s great to see that the money is having a positive impact in our local community.” Last year The Ryan McBride Foundation ran a small pilot scheme for the football programme in the Model Primary school before applying for Big Lottery funding. Its success showed the positive impact a longer scheme could have on young people in the area. Cianáin Campbell, 10, from Derry, is one of the young people who took part in the pilot last year. Cianáin needs a walking aid or wheelchair to move about which has affected his confidence to take part in sport, but being included in the scheme has given him the boost he needed to get active and join a local wheelchair basketball club. “Cianáin has always been such a happy child, he doesn’t let anything bother him. He always says ‘I don’t need to walk, I’m fine the way I am’. He didn’t really get involved in sport because he didn’t think he could do it,” said Cianáin’s mum Paula who looks after him full time. “I was surprised the day Cianáin came home and said ‘I can do football Mummy’. I didn’t understand how he could so I went along to the next class to watch him and I was amazed. I was so proud seeing him taking part just like everyone else. “Having the players there, who took the time to show him how he could use his walking trolley to play, really helped him. The kids really look up to the players and you could see the genuine interest the players gave to them. He goes to the matches on a Friday now and they always wave to him and will bring him down onto the pitch sometimes. It’s a real boost for him. “Cianáin’s confidence has grown in school and at home. He’s always been happy but he’s more enthusiastic now. He wanted to join a football club, but it can be a rough game which worried me. Then we discovered wheelchair basketball which he’s been going to and is thriving. He’s really finding himself.” The funding to The Ryan McBride Foundation is part of an announcement of almost £1 million of National Lottery funding to 111 groups across Northern Ireland. Other groups in Derry/Londonderry receiving funding are: Ally Foyle; Bond Street Community Association; Mandarin Speakers Association Derry; St Paul's Primary School Slievemore; Waterside Neighbourhood Partnership; and the Western Health and Social Care Trust. (Please see attached table for details) Julie Harrison, Big Lottery Fund NI Chair, said: “I am delighted to announce these grants under the Awards for All programme and I want to say thanks to all the National Lottery players who have helped make this possible. Small pots of funding that can have such a big impact on local communities and lives.” Application forms and guidance notes are available to download at www.biglotteryfund.org.uk. For more details call 028 9055 1455, or e-mail enquiries.ni@biglotteryfund.org.uk Pictured above: Cianain Campbell with Derry City players, Conor McDermott and Dean Jarvis.
ADVERTISEMENT - CONTINUE READING BELOW