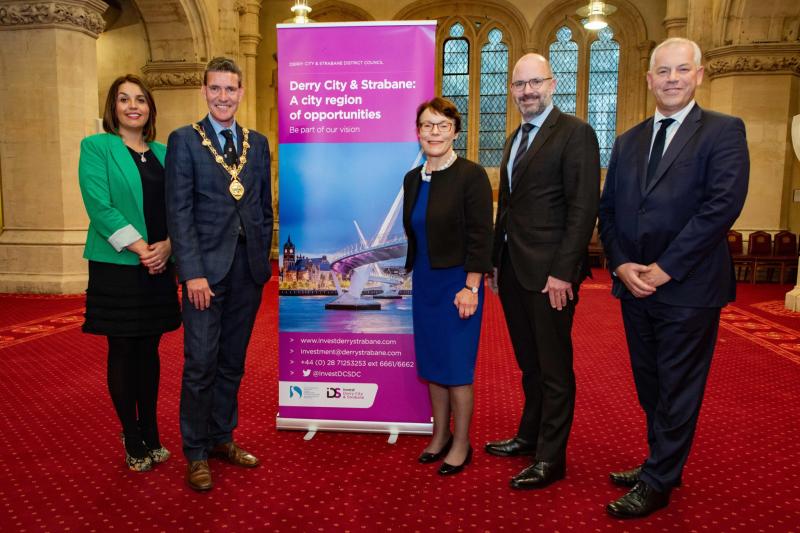 A delegation from the city travelled to London earlier this week to launch the Derry's City Deal bid proposal, at a prestigious event in London’s Guildhall.

The proposal is the next step in progressing plans for a City Deal for the region, and the delegation from Derry City and Strabane District Council met with senior government officials from the NI Office and the Ministry for Housing, Communities and Local Government, to discuss the need to enter formal negotiations around the bid following the invitation from the Chancellor of the Exchequer Philip Hammond, in July.

The meeting took place ahead of a special reception hosted by the City of London Corporation and the Mayor of Derry City and Strabane District, Councillor John Boyle, in the Guildhall Crypt that evening.

Chief Executive John Kelpie and officers briefed officials on the draft list of projects which will shape the framework of the City Deal bid, and progress on the business cases for the projects.

The Vision and Outline Bid Proposal provided more detail on the investment priorities for the City Region, focusing on three key areas, namely investing in Innovation and Digital, Enabling Infrastructure and Regeneration and growing the Private Sector. The delegation took the opportunity to outline the strategic projects which would promote growth in these particular areas, including the expansion of Ulster University’s Magee Campus, the upgrade of crucial transport links to the region, and a range of objectives already laid out in the Strategic Growth Plan for Derry and Strabane.

Later in the evening over 200 leading figures from business, education and the political arena from both Derry and London gathered at the London Guildhall’s historic Crypt to mark the recent invitation by the UK Government to bid for a City Deal, and to celebrate key investments in the Derry and Strabane area. The Putting People at the Heart of Innovation event provided the opportunity to further strengthen ties between London and the NW City Region, and focus attention on its growing reputation for innovation and excellence.

Guests heard from a number of speakers, including the Mayor, Foyle MP Elisha McCallion Catherine McGuinness, Chairman of the Policy Committee, City of London Corporation and Council Chief Executive John Kelpie, who gave an update on the ongoing work on the City Deal bid.

Keynote speaker at the event was Darragh McCarthy, CEO of financial services company FinTrU, who recently announced a major jobs boost for Derry with 305 posts based at a new office in the city. He provided some insights into his own business success, and stressed the need to drive entrepreneurship and invest significantly in emerging talent.

The Mayor took the opportunity at the event to highlight the North West’s growing reputation as a centre for innovation and enterprise, making it an increasingly attractive location to do business. “I am delighted to have the opportunity to join with the City of London Corporation in hosting this event,” he told those gathered.

“Our strengthening ties with the City are evident here tonight, and we want to get across that message that the NW City Region is open for business with an exceptional offering of skills and talent that is second to none. I look forward to seeing our relationship progress and to the advancement of our City Deal bid, which will be pivotal to delivering our long-term goals.”

Council Chef Executive John Kelpie gave an overview of recent investments in the city, which he said were already paying clear dividends. “In recent months we have seen substantial increases in employment in ICT, Financial and related professional services. We now need that commitment from government that a City Deal is top of the agenda in order to continue this momentum, and unlock the critical funding needed to deliver the City Region’s key catalyst projects.

“I was delighted at the positive feedback regarding our Vision and Outline Bid Proposal at today’s meeting and look forward now to progressing to the next stage in the process of securing a City Deal.”

Picture: Mayor of Derry City and Strabane District Council, Councillor John Boyle, co-hosted a special reception this week in London’s Guildhall held in conjunction with the City of London. Pictured are the speakers at the prestigious event includingFoyle MP Elisha McCallion Catherine McGuinness, Chairman of the Policy Committee, City of London Corporation, Darragh McCarthy, CEO of FinTrU and Council Chief Executive John Kelpie, who gave an update on the ongoing work on the City Deal bid.