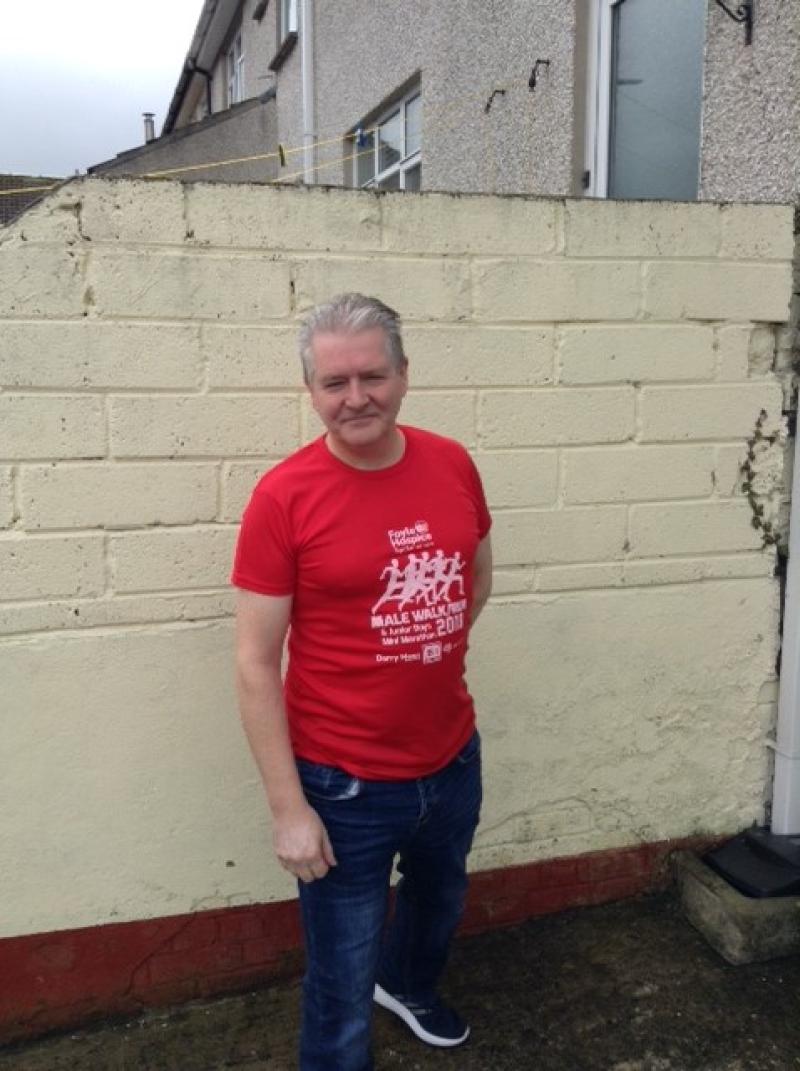 A Derry artist who took up running after beating cancer is urging others to join him in a sponsored run for a charity this weekend. Joe Campbell, whose work has been the subject of a host of exhibitions, is getting ready to take part in the Annual Foyle Hospice Male Walk/Run & Junior Boys Mini Marathon this Sunday. But five years ago he was in a very different place, having just been told he had bowel cancer. Speaking to Derry Now Joe admits the news left him feeling fragile and isolated. “It’s a strange, surreal experience to be told you have a life-threatening illness,” he explained. “In an instant you become another person. What hits you most is the reality of it, or the need to find a way to accept that reality.” The 60-year-old first knew there was something wrong when he saw blood in his stools. “Being a typical bloke, I thought ‘How can I get round this one?’” he admitted. “But, thankfully, I had the sense to tell my partner Pam, and that was it. “No question, I was going to my GP straight away, and I am so glad I did. “My GP examined me and immediately initiated what is known as ‘a red-flag referral’ which puts a person with potential cancer straight to the top of the waiting list. “The next step was a scan after which the consultant took myself and my wife into a small room and confirmed our worst fears – I had cancer.” Joe was told he would require immediate surgery and he faced an anxious wait to find out how far the disease had spread. “I think that period between the diagnosis and the confirmation of how far the disease had spread was the worst,” he recalled. “It was just the fear of not knowing.” “To cut a long story short, my operation was a success and what followed was six months of chemotherapy. “Not the most pleasant experience, but it was necessary to try to improve my chances of my cancer returning.”   Dark place   Joe said that his wife Pam and children Margaret and John were his constant companions throughout his illness. “They walked beside me in the shadow of the illness, a dark place for anyone and I know their love and support helped me through some very black moments,” he added. “Whilst you’re being treated everything revolves around your recovery. “Initially, it’s about survival. And, if you get through, subsequent treatments can last up to two years.” Despite beating the disease, Joe admits it has life altering for him. “There is no doubt, cancer changes you. Survival changes you,” he continued. “It puts all those little stresses and problems that plague us all, in the shade and in perspective. Little of that matters anymore. “The down side, at least for me, is you are unemployed and out of the loop. “The psychological effects take a lot longer to get round, because isolation can set in. “Suddenly, and in no uncertain terms, you can feel redundant and down. “It’s a spiral that’s difficult to get around.”   Best result     When Joe was at a low ebb his brother Dermott, himself a seasoned runner, suggested he sign up for a ‘Couch to 5k’ ten week challenge with Reach Running Club. “I’m no Mo Farrah and never will be, but the club gave me the fitness, the support and the confidence to achieve my best result to date - finishing the Waterside Half-marathon last year,” Joe continued. “That feeling of belonging to a like-minded group is one of the best things we can do in life considering how brief our life-spans are and how fragile our health and well-being actually is. “One of the biggest killers, in my estimation, can be isolation.” Joe says that many of the men taking part in the Foyle Hospice Run will have similar back stories to tell. “Please, give them all the support you can and a big cheer this coming Sunday, life’s too short not to,” he added. “I don’t think I’ll be breaking any national or world records but I’m sure I will have the company of my friends and colleagues from my local running club, Reach, to keep me company. “Joining a local club is not just a way to keep fit but also a nice way to donate to charity, to get out and to make new acquaintances. “The Hospice is such a vital place. “It is where some of those who weren’t as fortunate as myself and their families, may be able to find a final dignity.” You can still sign up for Annual Foyle Hospice Male Walk/Run & Junior Boys Mini Marathon at www.foylehospice .com or call into the fundraising office on the Culmore Road.
ADVERTISEMENT - CONTINUE READING BELOW