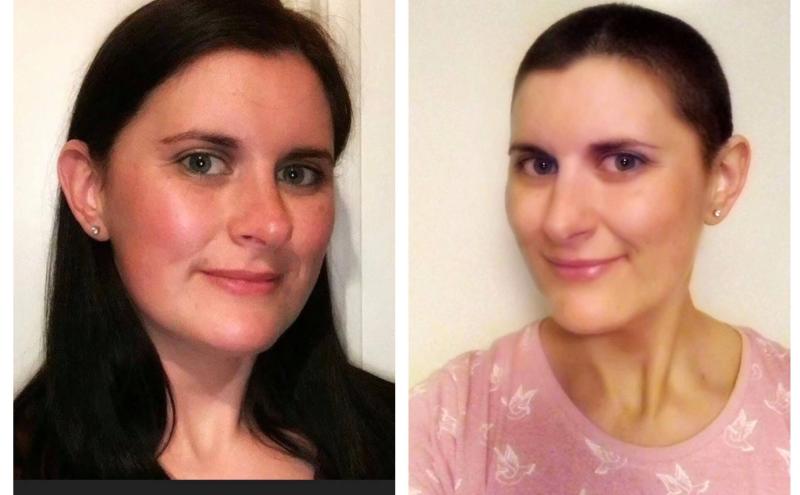 A Derry cancer survivor who once feared she would lose her hair due to cancer treatment has shaved her head to raise vital funds for charity. Kim Dufoulon, 35, from the Ballymagroarty area of the city, hosted a ‘Brave the Shave’ event at The Cosh Bar at the weekend where she went had her locks shorn off, raising £850 for the Macmillan Cancer in the process. Speaking to the Derry News after the event, Kim said that she once feared losing her hair while being treated for cancer, but then came to the realisation that it was ‘just hair’. “This time last year I was being treated for melanoma (skin cancer) but I was lucky that they were able to remove it before I had to get radiotherapy or chemotherapy,” she said. “At the time I was freaking out thinking that, if I had to get treatment, I was going to lose my hair and my eyebrows but then I just calmed down and realised, it’s only hair – it will grow back and I’m alright.” Kim added that she felt losing hair was not important in the grand scheme of facing cancer, so she decided to help a charity that supports people going through cancer treatment and living with the disease. “After I shaved it, I wasn’t worried or scared,” she added. “People were saying, ‘Oh, you’re so brave!’ but I didn’t feel like I was, I just though, it’s hair and will grow back – I felt good after I did it!” Kim said that her brother, Paul Fisher, also supported her by shaving off what she described as his ‘big horrible lumberjack beard’. Kim raised a fantastic £850 by also holding bingo with spot prizes on the night. Pictured above: Kim before and after braving the shave!
ADVERTISEMENT - CONTINUE READING BELOW