October 5, 1968: ‘I am more concerned with today and tomorrow, not yesterday’-Bernadette McAliskey 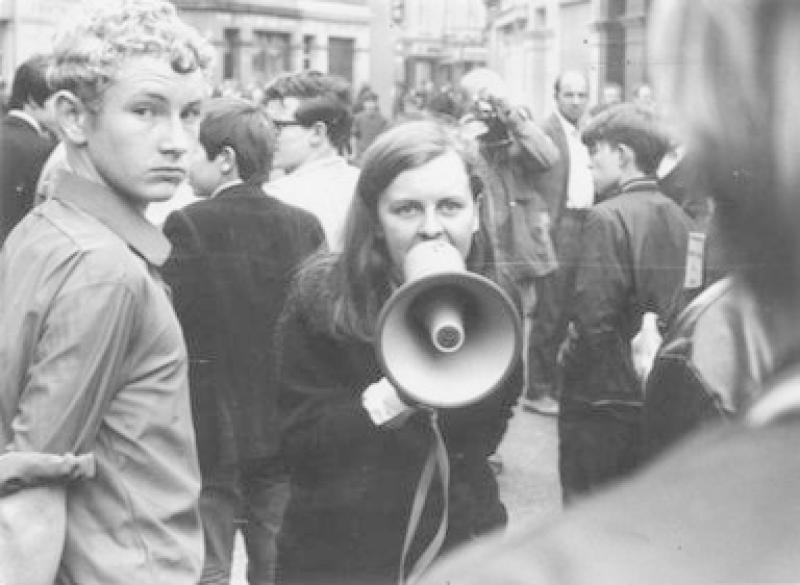 In the lexicon of Northern Ireland politics the phrase ‘inextricably linked’ has almost become a cliche because of its overuse in a variety of contexts.

However cliched, the name of Bernadette McAliskey will forever remain ‘inextricably linked’ to the Civil Rights movement of the 1960s.

For her part in the Battle of the Bogside in 1969, she served a brief period in jail for incitement to riot.

And, once the youngest woman ever elected to Westminster, in the wake of Bloody Sunday the then Bernadette Devlin, famously crossed the floor of the House of Commons and slapped Home Secretary Reginald Maudling in the face. Maudling had claimed that British Paratroopers had fired in self-defence on January 30, 1972.

She has often been quoted as saying that her only regret over that incident was that ‘I didn’t hit him hard enough.’

In January of 1981 Bernadette and her husband were shot multiple times by loyalists in their home near Coalisland whilst undercover soldiers watched the house. This resulted in strong claims of collusion between loyalist paramilitaries and the security forces.

As the 50th anniversary of the Civil Rights demonstration in Derry on October 5 approaches, Bernadette told the Derry News: “I am more concerned with what’s happening today, tomorrow and the day after rather than what happened yesterday.

“I only see value in the past as a way of looking to see what we have learned from it in order to improve the present and as much as we can control it, the future.

“Those of us who were young in 1968 were full of hope and ideas. For my part, I looked at the society I lived in everyday as an adult and I wasn’t prepared to leave it unchallenged as I grew older and allow injustice to go unchecked.

“I refuse to call myself a veteran. I don’t like that term, I never did because it allows faux nostalgic territorial ownership over what was done then as opposed to reflection on what should be being done now.

“We need to take a look and say ‘we won battles and lost battles’, but half-a-century later the inequalities we face now are greater than those we faced then.”

Asked what people here are still trying to achieve 50 years after a pivotal day for the civil rights movement Bernadette said: “We are dealing with the inequality of respect for human integrity based on prejudice that has never gone away.

“What we are facing here now is managed and reconfigured economic inequality and a denial of opportunity to access the development of individual human potential.

“It’s based on class prejudice and social prejudice that is also being managed and reconfigured. We have lost solidarity, solidarity and empathy-the qualities that have helped us survive the consequences of standing up and demanding justice. These qualities have significantly diminished since 1998.

“The trauma of the past, the absence of resolution through justice has been endemic as has the emotional capacity of individual families and communities to recover from it. The resolution of that trauma has been seriously impeded by an almost universal collusion that we should never mention the war again.

“We should be using that period of 50 years ago to show those who would claim bragging rights for ’68 would be better served to reflect on strategies an actions for the future. But, nobody wants to have that conversation.

“We tend to think we are unique, but we’re not. We are told our situation is normal now, and they are different definitions of normal, but because a lot of people tell us that, it doesn’t make it true.

“There are different levels of need; a lot of diversity of people involved in everything. People who have the least pay the most whilst the upwardly mobile move to the front of any struggle and then they stop because they don’t want to have to share. When they get up the ladder, they pull the ladder up so no one else can climb up and claim the spoils.”

So, we asked, half-a-century on from 1968 is Bernadette McAliskey saddened when she looks back?

“I am not saddened in so much that I didn’t expect better. I remember being asked if we achieved peace and resolution where would I be in the scheme of things. I said I’d be at the back heckling because we haven’t achieved enough.

“What does make me sad on occasion is that the price we paid was to effectively go into a spiral to end up very little further forward. What we achieved doesn’t balance up with the price we paid. But, it should cause us to keep trying. Besides, I don’t have much time to be sad because I need to keep learning to combat the inequalities of the day.

“I don’t have time to be sad because I can also see that, after a period of going through political paralysis, people are fearful that we will go back to war and they don’t want to challenge what’s going on.”

She said: “There’s been a huge level of political corruption everywhere. It’s the result of people being dazzled by new found comforts. The tsunami of finance has corroded independence.

“Patrick Pearse said ‘They think that they have pacified Ireland. They think that they have purchased half of us and intimidated the other half.’ It looks like this was true. It’s also the realisation that war is not returning so stability settles and with it comes corruption. It’s the nature of politics, but I believe that young people looking at the current situation are becoming politically active again.

“I have the joy of having paid employment. I didn’t make money from the war like others. It was the realisation at the age of 55 that I was effectively blacklisted from jobs that made me go out and work for a statutory pension. I’ll work until I am 75-years-old and then I’ll retire.

“I love working with people half my age and even younger than that. It’s those young people that have convinced me that things will reconfigure again and that there is leadership there.

“I said in 1998 that I wasn’t opposed to peace but that it was merely managing the aftermath of conflict not resolving it. People’s heads were filled with an abundance of half-truths and false stories. Young people were fed a false narrative about how the war was won.

“My timing was out. I said it would take 15 years before going back to war was mentioned again, in fact it's taken 20 years.”

So, what of the future?

“I used to talk about Betty Sinclair being a veteran, like people talk about me now,’ laughed Bernadette.

“But there are people out there now at 15 or 16-year-olds looking at a much broader range of diversity.

"From there a new leadership will emerge. I love it when there’s a sit down protest on a street or a building is taken over in protest. It’s direct action and it does my heart good. It’s showing a building strength and community relationships.

“There again, we still have British intelligence holding back justice and diverting people into petty squabbles down dark side streets.

“But, we will overcome that too. So, that’s why we need to look more to the future than to the past,” she said.