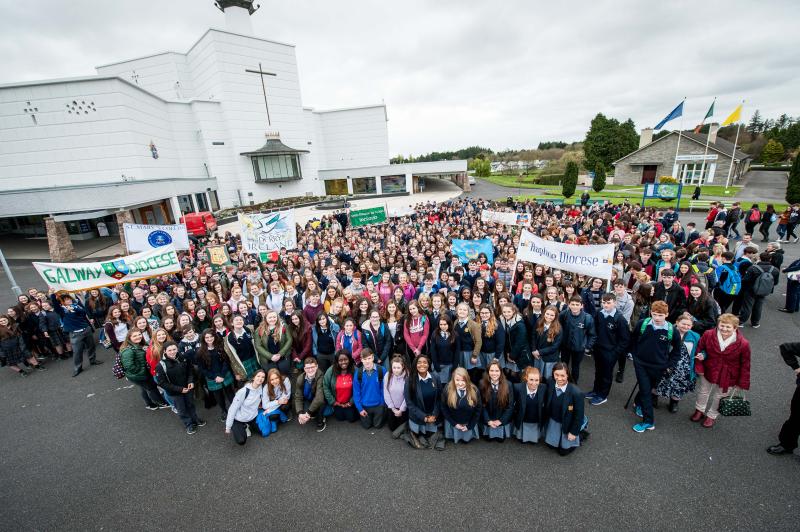 Derry students who have received the Pope John Paul II Award or are currently working towards it have taken part in a pilgrimage to Knock. The young people were joined by Bishop of Derry Donal McKeown for the event which took place last month. The Award was launched in Derry in 2006 by the Papal Nuncio, Archbishop Lazarotto. It is now running in 23 dioceses in Ireland and 2 in Britain - the Archdiocese of Birmingham and the Diocese of Hexham and Newcastle. In the last twelve years, over 24,000 young people have enrolled in the Award. It was acknowledged recently, that the Pope John Paul II Award is the largest youth movement in the Church in Ireland today. The pilgrimage to Knock Shrine provided young people in attendance with the opportunity to share their experiences of participating in the Pope John Paul II Award, discuss how it impacts on their faith and recognises the special place they have in the Church today. They had time to pray together, to listen to inspirational talks by Sr Ethel Normoyle of the Little Company of Mary in Ireland and director and founder of the Missionvale Care Centre in Port Elizabeth, South Africa. Alan Kerins - Irish sportsman, humanitarian, social entrepreneur and philanthropist. Alan has raised close to €5 million to end poverty and suffering of tens of thousands of people in rural Southern Africa. Bishop Donal McKeown, Bishop of Derry, Patron of the Award celebrated Mass and was joined by Bishop Alphonsus Cullinan, Bishop of Waterford & Lismore and priests from participating dioceses. Music was provided by Elation Ministries, choirs from participating dioceses and a soloist from Scoil Mhuire, Buncrana, Co. Donegal.
ADVERTISEMENT - CONTINUE READING BELOW