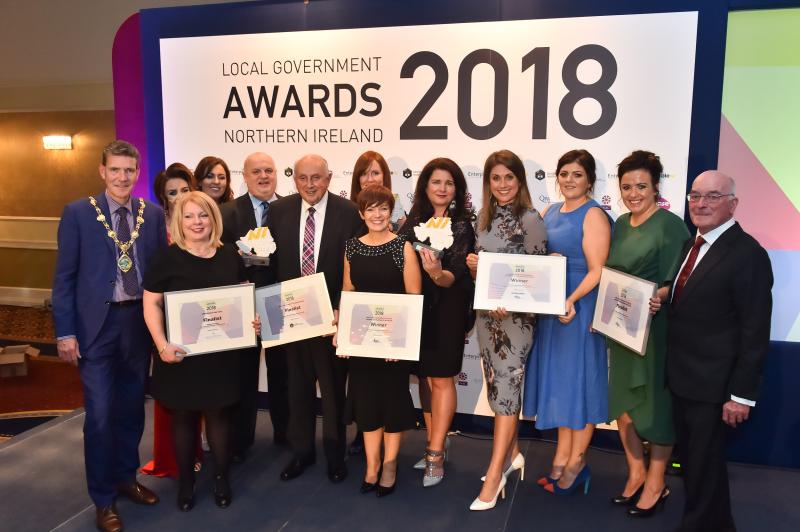 Derry City and Strabane District Council won three of the nine Local Government awards at the recent annual NILGA Awards ceremony in Armagh, it has been announced.

Paying tribute to the Council on its success, Mayor of Derry Cllr John Boyle said it was evidence of how the Council is leading the way on good practice, leadership and creativity.

Among the awards secured by Derry City and Strabane District Council was the Local Government Award for Excellence in Environmental Sustainability for its Environmental Stewardship programme, the Best Local Authority Elected Member Development Initiative, while the Employee of the Year Award was won by Human Resources Officer Deynah Doherty in recognition of her work in setting up the Council Choir, as part of the BeWell initiative.

The Council was also runners-up in the best local authority tourism initiative for its annual Halloween celebrations.

Congratulating Council on its success at the awards, Mayor Boyle said he was very proud to represent the city and district at the event.

He said: “This is a fantastic achievement by our Council. We are over the moon to have scooped three of the top awards at this hugely prestigious event. I would like to take this opportunity to extend my congratulations to all the staff for their hard work and commitment. Securing these accolades is a huge achievement and evidence of the great work being done by staff across the entire Council in all aspects of its work. On this occasion the work carried out by the Council on improving our local environment, providing leadership in local democracy and putting the health and wellbeing of our staff to the fore, was acknowledged. Well done to everyone involved, your hard work and commitment has paid off,” he said.

Image – Delegation from Derry City and Strabane District Council with Mayor Cllr Boyle pictured with the awards they secured at the NI Local Government Awards in Armagh. (SimonGrahamPhotography)