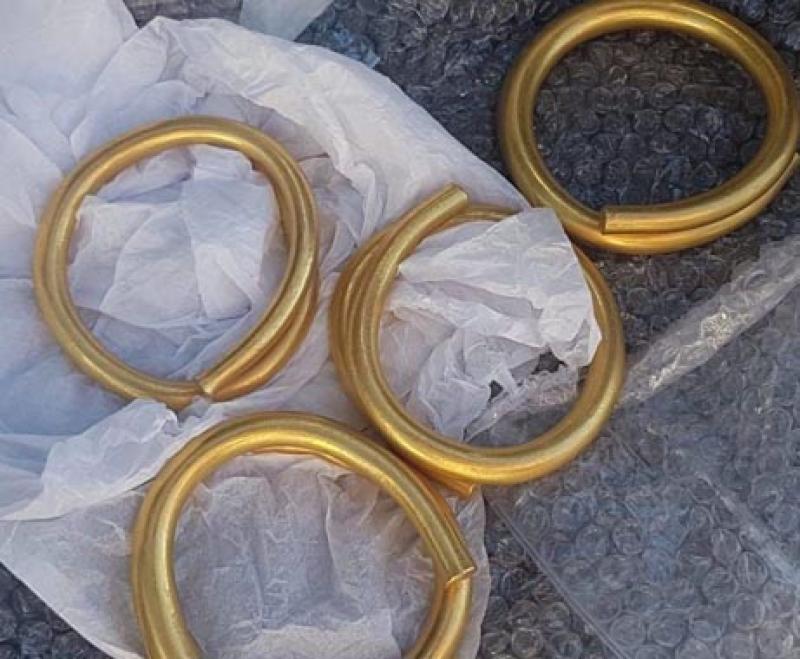 The four solid gold rings dating back to the Bronze Age, known as the "Tullydonnell Hoard," which were discover in Co Donegal earlier this year are to go on display in the National Museum of Ireland. Donegal TD and Minister for Education and Skills, Joe McHugh, will officially open the ‘Tullydonnell Hoard’ exhibition at the National Museum of Ireland – Archaeology next Wednesday October 24th. The ‘Tullydonnell Hoard’ was unearthed in Donegal in June and, following investigative and conservation works by the experts at the National Museum of Ireland, the four Bronze Age gold rings will now be available for the public to enjoy at the National Museum of Ireland – Archaeology and, next year, at the Donegal County Museum. The four gold rings (pictured) are believed to date back to the Bronze Age, the period from approximately 2500 to 500 BC. Experts from the museum travelled to the site in Donegal where the artefacts were discovered and carried out an investigation of the area to try and ascertain how and when the objects had been left there. Maeve Sikora, the museum’s keeper of Irish antiquities, said the find had been a “chance discovery” and would play an important role in adding to the history of Bronze Age Ireland. “Every archaeological find tells you something new about a particular period. For us it’s not just about the objects but also the context – it’s the whole package.” She added: “It’s an important archaeological find and will reveal something new about the area, that period of time and will add to our understanding of prehistoric Ireland and how rich the culture was then.” The last big Bronze Age discovery was in 2010 when a hoard of gold artefacts was recovered from a rubbish skip. The objects had previously been kept safe at a chemist’s shop in Co Roscommon after being discovered in a bog in nearby Coggalbeg in 1947 but were stolen during a robbery. Gardaí recovered the objects from the bin and they were handed over to the national museum.
ADVERTISEMENT - CONTINUE READING BELOW