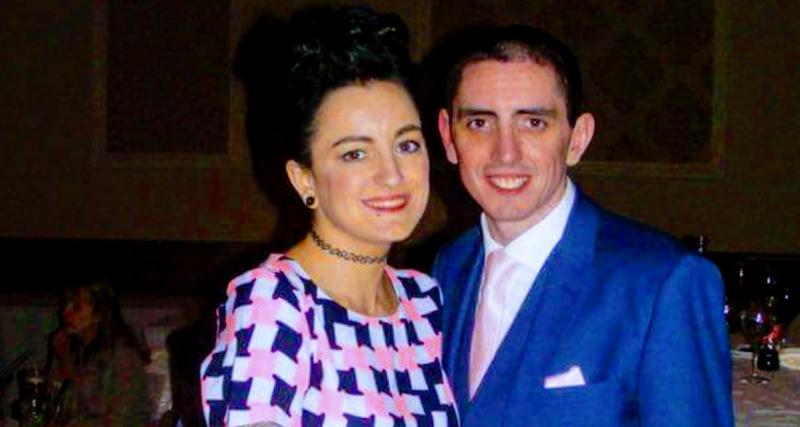 A Derry father has spoken of his heartbreak at losing both his children to a genetic disorder which saw his son and daughter die within months of each other. Cystic fibrosis (CF) is a genetic disorder that affects mostly the lungs, but also the pancreas, liver, kidneys, and intestine, and is potentially fatal. In May 2016, Bronagh McMenamin, a footballer with the Derry City Ladies team, lost her fight with Cystic Fibrosis at the age of 24. Just eight months later, her big brother, Aaron, also lost his battle with the condition, aged 29. Aaron was due to get married this Saturday, October 20. In today’s Derry News, their father William, speaks of the grief he and wife Margaret are feeling three days before what would have been the happiest day of Aaron’s life, and how they have been trying to cope with such a devastating loss. “On Saturday, October 20, our hearts will be breaking,” William said. “We will not see our son Aaron take the hand in marriage of the girl he loved, we will not see his sister Bronagh be his bridesmaid, his cousin Stephen stand beside him as best man. “His mother will not wear the big hat and be as proud as punch that her wee boy is getting married and I won’t get the chance to make a speech and embarrass them both with my ‘daddy dancing’. “Both our children, ‘our only children’, will always be in our thoughts and our hearts.” He added that while their battle against their condition has presented both Bronagh and Aaron with many difficulties, they still enjoyed life. “Aaron and Bronagh had it hard at times but they also had a good life,” he said. “They never let their illness get them down and they got on with everyone and everything within the limitations that Cystic Fibrosis presented. “Our daughter got on with her work, she loved her car, she loved getting dressed up, getting her hair and make-up done and heading to the town to meet with friends and have a ‘few pints’,” he joked. Bronagh equally loved getting her jammies on and sitting in front of the fire curled up with her wee dog Mitzy, and she was well known for her pranks and had the most infectious laugh. “Our son Aaron enjoyed his darts, his girlfriend, Emma-Lee, his XBox and PlayStation, his sister, his car and of course us, his parents. “All in that order I might add! “He also enjoyed life, we had a good family unit, we enjoyed every day we had together, we laughed, cried, played and argued, sometimes all at the same time! “But we got on with it.” William added that an additional sense of sadness had come from the fact that his son and daughter had died so young, and would never get the chance to experience what many others take for granted. “They had such a good life in spite of their battle with Cystic Fibrosis and indeed they missed out on so much because they passed so young,” he continued. “They will never know the joy of having children of their own and we will lose out on watching them grow into the beautiful young lady that was Bronagh, and the tall handsome man that was Aaron. “They never got the chance to watch us as parents grow old, look after us and care for us the way we did for them. “As for my wife Margaret and I, we will never hear them laugh, cry, complain that there is nothing to eat in the house despite returning from shopping with £150 worth of food,” he added. “We will never get to hear them calling out at night, letting us know that they are home safe, or ring at 3am asking for a lift home because they can’t get a taxi, we will never have grandchildren of our own.” Support William added that despite their heartbreak, they have been grateful for the support they have received over the past two years from their family and friends. “We are heartbroken and always will be, we are trying hard to get on with life as they would want us too,” he said. “We have very good family and friends and would like to thank everyone that has helped us over this very hard time. “Margaret and I will never forget what you all have done for us, we love all of you and will always be grateful. ‘’A family apart but always together, A love so strong will be here forever, a son and a daughter at Heaven’s gates for a mother and father they will always wait.” Above - Bronagh pictured with her brother Aaron.
ADVERTISEMENT - CONTINUE READING BELOW