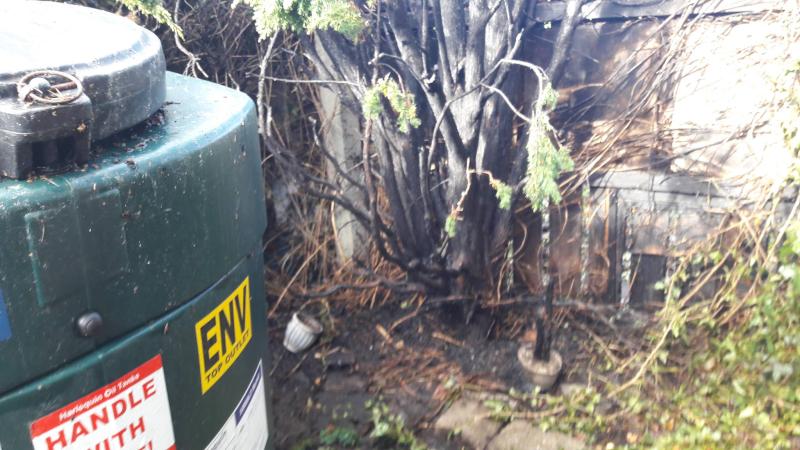 A Derry woman battling cancer whose oil tank almost caught alight due to a deliberate fire has said she her wheelchair-bound neighbour would not have made it out alive if it had ignited. Majella Gallagher, 59, was at her home in the Bracken Park area of Galliagh on Tuesday night around 8.30pm when she was alerted to a fire to the rear of her home. Majella, who buried her aunt at the weekend, is fighting cancer alongside a number of other health conditions that cause her mobility issues. She said that the fire made her fearful for the safety of her wheelchair-bound neighbour before adding that the latest incident marked the that third time in the year and a half since she moved in that her garden has been set alight by youths. However, she said that Tuesday night’s fire was the most serious to date given that it was perilously close to her oil tank. Majella also told the Derry News that as she was thanking members of the Northern Ireland Fire and Rescue Service (NIFRS) as they were about to leave the scene, someone spotted that there had been a fire lit at the same spot, which was immediately extinguished. “The Fire Brigade said that another two minutes and the whole thing would have gone up,” she said. “And as we were saying thank you to the fire brigade when they were going, someone said it had been set alight again but they couldn’t catch them. “It’s hard to believe.” Majella said she was extremely grateful for a passer-by who got her out of the house when he noticed the blaze. “I don’t even know the fella that knocked my front door but I’m very grateful for him,” she added. “He came running up the path and was banging on my door shouting, ‘Missus, get out of your house, your oil tank is about to go up’.” Scary Majella said the NIFRS responded extremely j quickly and tackled the blaze. “I have cancer and gout and different health complications and there are times I can’t even walk but I was more concerned about my wee neighbour, she has Multiple Sclerosis (MS) and is in a wheelchair,” she added. “The two bungalows are attached, and if mine had gone up in flames with that oil tank, her’s would have as well. “She never would have made it out of that bungalow. “They don’t realise the danger they are putting people in, I’m just grateful we are both here today. “It happened in daylight once, then during the bright nights and now they’ve moved onto waiting for it to be dark. She added: “I couldn’t sleep all night and I’m just trying to get over the death of an aunt who was just buried on Sunday - it’s scary.”
ADVERTISEMENT - CONTINUE READING BELOW