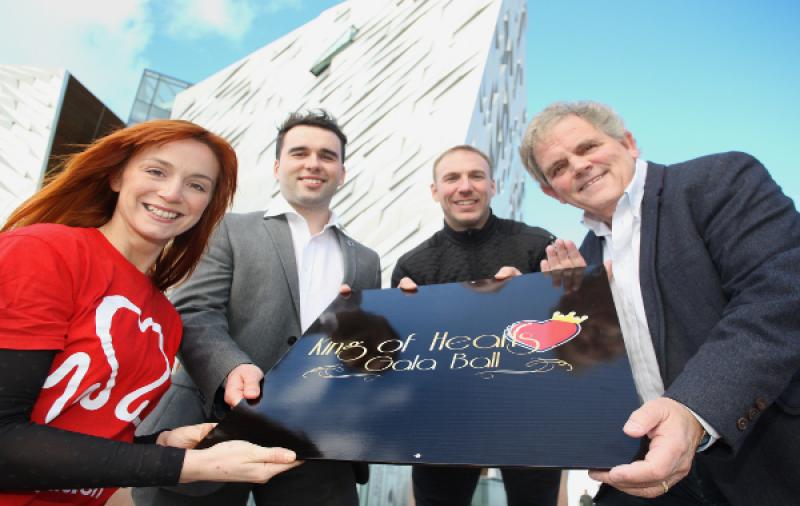 The family of a young Derry GAA player who died suddenly from a previously unknown inherited heart condition are to hold a gala ball next year to raise funds for research into the silent killer. Kevin King (22) died suddenly during a game of indoor soccer with friends at Campsie outside Derry on Thursday, November 3, 2016. The sports mad Eglinton man played for his local club St Mary’s, Slaughtmanus and his death sent shockwaves through the local GAA and wider sporting community. After Kevin’s death his parents John and Margaret and brother Martin learned he had arrhythmogenic right ventricular cardiomyopathy (ARVC) an inherited heart condition that damages the muscle of the heart and can lead to sudden death. On Saturday, May 4, 2019, two days before what would be Kevin’s 25th birthday, the family are set to hold the King of Hearts Ball in Titanic Belfast. The glittering black tie event was launched today by event compere TV sports legend Adrian Logan and Ireland rugby star Stephen Ferris who will speak at the King of Hearts Ball about his sports career. Both sports figures support the family’s campaign for more research into inherited heart conditions that claim the lives of too many young people in Northern Ireland. Money raised from the event will go to British Heart Foundation Northern Ireland (BHF NI) for research into inherited heart conditions. BHF NI estimates that around 17,500 people in Northern Ireland have a faulty gene which puts them at an unusually high risk of developing heart disease or dying suddenly at a young age. It is estimated that at least one young person (aged under 35) dies every month from an undiagnosed heart condition here. The King family and their wider community have so far raised more than £60,000 for BHF NI’s heart research but this is the first time their fundraising efforts will come to Belfast. In May 2017 their King of Hearts Ball in the Everglades Hotel in Derry had more than 400 attendees. Martin King said: “Kevin loved sport. He lived for football and his club. He was the last person you would expect to die so suddenly. “His death devastated our family and left a hole in our lives that just can’t be filled. But we wanted to do something that would honour his memory and also try to prevent it happening to any other family. We wanted something good to come from his death so that’s why we decided to raise money that will fund research into sudden deaths in young people. “It happens across all walks of life and in all sports. Young GAA players, rugby players, soccer players and others are dying too soon and that’s why the King of Hearts Gala Ball will have a big focus on sport and how, with research, we can save the lives of our young people.” Stephen Ferris said: “I am proud to support the King family in their efforts to fund heart research. Knowing that every single month here in Northern Ireland a young person says goodbye to their parents, siblings, husband or wife and then never comes home again is just unthinkable. “Sudden deaths of young people in sport is a cause close to my own heart so it’s my pleasure to support what will be a fantastic evening.” Adrian Logan said: “I am honoured to be involved in such a worthy event. It's always heart breaking when you hear of the death of young sports stars and hopefully the funds raised here will go a long way in helping families in the future. “The death of Kevin was a tragedy but his family are determined to make a difference in the future. Many well-known people will be at the ball but for me John, Margaret and Martin will be the real stars. I wish them every success.” Órla Clarke, fundraising manager for BHF NI said: “We are delighted that the tickets are now on sale for the King of Hearts Gala Ball. It is going to be a fantastic evening with excellent food and entertainment. We also have sponsorship opportunities for local businesses so anyone interested in supporting this important event please do get in touch.” To buy tickets for the King of Hearts Gala Ball visit giftshop.bhf.org.uk/kingofheartsball2019 or to discuss sponsorship opportunities contact Órla Clarke on clarkeo@bhf.org.uk.
ADVERTISEMENT - CONTINUE READING BELOW