WATCH: Derry scientist urges people to Stand Up To Cancer and help save lives 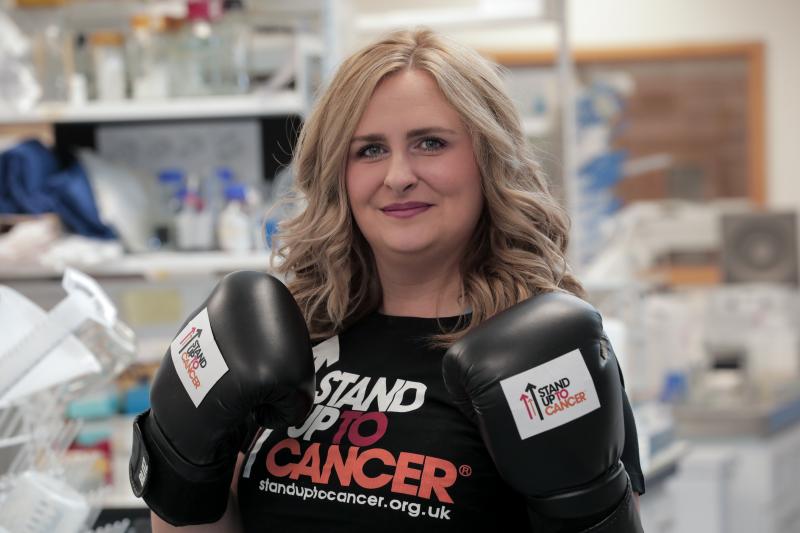 A cancer researcher from Derry is rallying people in Northern Ireland to Stand Up To Cancer and help save lives. Dr Emma Kerr, aged 32, who works at Queen’s University Belfast, donned a special pair of boxing gloves to encourage men and women to strike a blow against cancer by raising money for vital research. The cancer-fighting scientist is trying to find new ways to tackle bowel cancer, by studying how the disease hijacks normal processes the body’s cells use to make energy and grow. These changes can help bowel cancers resist chemotherapy, making treatment less effective. Emma said: “The majority of bowel cancer patients will, at some stage, receive chemotherapy but unfortunately some of those patients will develop drug resistance and their tumour will stop responding to the treatment. “My work focuses on understanding how cells use energy to grow, and how changes to these processes in cancer cells can limit how a patient responds to treatment.” She continued: “Our aim is not only to find ways to help doctors predict which patients might not respond to chemotherapy, but to develop new ways to help these patients in the future.” Emma began her career as a scientist at Queen’s University Belfast in 2008 where she studied under Professors Patrick Johnston and Dan Longley, two of the world’s leading bowel cancer scientists. Her research then took her to the University of Cambridge for six years to study lung cancer. She returned to Northern Ireland in June this year, after being awarded around £1.8 million by Cancer Research UK to start her own research group at the Centre for Cancer Research and Cell Biology at Queen’s University. Now Emma is urging everyone in Northern Ireland to join her and Stand Up To Cancer, to support life-saving research. Stand Up To Cancer unites scientists, celebrities and communities. It’s supported by a host of stars including Davina McCall, Edith Bowman, Alan Carr, Joel Dommett and Kirsty Allsopp. Money raised for Stand Up To Cancer helps take developments from the lab and transform them, quickly, into brand new tests and treatments for cancer patients. One person is diagnosed with cancer every hour in Northern Ireland*. Dr Kerr said: “Research is cancer’s number one enemy. Stand Up To Cancer helps fund clinical trials and research projects which pack a punch in the fight against the disease. “This research is crucial, but also very expensive. That’s why I’m calling on Northern Ireland’s fundraisers to get fighting fit and help doctors and scientists speed through breakthroughs for the benefit of cancer patients across the country.” Since it was launched in the UK in 2012, Stand Up To Cancer has raised over £38 million to support life-saving research. This includes the development of the ‘chemo-package’ to deliver treatment at the best time for the patient; investigations into whether exercise can prevent cancer from returning and using MRI to turn radiotherapy into a more precise, personalised and powerful anti-cancer weapon. Dr Kerr added: “When it comes to cancer we need to box clever. By boosting funding right now, the best research teams will be able to develop innovative new treatments, bring cures faster and save more lives.” Stand Up To Cancer will culminate with an unforgettable night of live television on Friday, October 26. You can the video of Emma here - https://www.youtube.com/watch?v=q0apBRXGLSs&feature=youtu.be
ADVERTISEMENT
Advertise with Us
ADVERTISEMENT
Advertise with Us
ADVERTISEMENT
Advertise with Us
ADVERTISEMENT
Advertise with Us