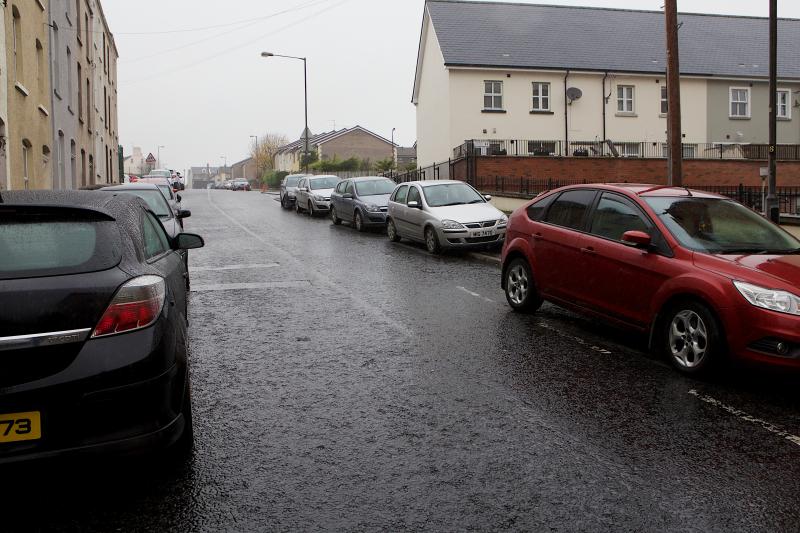 Residents of the Rosemount area of Derry claim they have been left frustrated by ‘inconsiderate people’ who are abandoning vehicles outside their homes and forcing them to park miles away. Dorothy Campbell, 68, has lived on Academy Road for over forty-five years and she, along with the rest of the community, have been experiencing problems with students ‘abandoning their cars’ in the area for ‘quite a few years.’ She said that cars now park the length of the road and along side streets which results in ‘complete pandemonium’ in the afternoons when parents come to collect their children outside of the Model Primary School and Academy Nursey School as there is nowhere for them to park. Students and others are abandoning their vehicles on footpaths which is reducing visibility for drivers exiting side streets and subsequently putting them in danger. Mothers pushing babies in prams and wheelchair users also have no way of negotiating the footpaths safely. “If I have to walk out onto the road with my dogs, what is a person with a pram having to do? “It’s getting out of hand, it just gets on my nerves the way they come up here and abandon their cars wherever they want. "Even if there are spaces free they park outside the houses because they don’t want a traffic warden coming along and giving them a ticket. “They give no thought for the people living here. I applied five times to get a disabled parking space for my husband due to his health difficulties and we couldn’t even get one. “I was sent a letter and they said there was ample parking on Academy Road, they told me that when I was bringing my husband home from hospital appointments that I could park outside and take him into the house, then go find another parking space. “There’s no ample parking, they just didn’t want to do it. I know in my heart of hearts that I should’ve highlighted it at the time.” She continued: “That was the start of my crusade, and I thought how dare they not get me a parking bay. And I’ve told people that outside my house is not a car park. “It has got to the stage now where it’s getting out of hand, people are parking on footpaths and you can’t see when you’re coming out of Northland Way on to Academy Road. "It’s a wonder there hasn’t been an accident at this stage.” Dorothy said people park their cars and walk to North West Regional College and she knows of residents on Duncreggan Road who experience the same issues with students from Magee University. My suggestion would be to put bollards at the corner of the footpath to stop people parking there which would at least keep those areas clear. “A lot of the students also park behind the fire station, along Northland Way and Northland Crescent. "The other day I seen cars parked the wrong way in a one-way street, it makes it very hard for other people to get through, they’re being completely inconsiderate of other road users. “It’s making it difficult and dangerous for people and that’s why the community is angry and fed up. We’re sick and tired of it and it’s time we started a petition.” Car park She made the point that NWRC and Ulster University (UU) need to invest in extra car parking spaces for their students and even suggested that a large car park could be built at the Fort George site to ease parking congestion in the city. Dorothy added that the college and university will say the same thing about advising students to park safely, ‘but they need to come up with solutions.’ Residents shouldn’t have to ‘suffer’ because of a lack of foresight and planning from the authorities, Dorothy added. Both NWRC and UU have said they will work with residents to deliver a satisfactory solution to the problem. A spokesperson for North West Regional College commented: “We are aware of the current issues regarding car-parking in this particular area, and it is our intention to continue being part of any discussions which will be aimed at finding a speedy resolution for everyone concerned.” Meanwhile, a Ulster University spokesperson said: “We are working closely with PSNI and the Aberfoyle and Duncreggan Residents Association and have advised all students and staff to park legally and considerately. "We understand that the PSNI and the Residents' Association will also communicate this to the general public who may also park in the area.”
ADVERTISEMENT - CONTINUE READING BELOW