KENNY'S LAST STAND? Derry City will wait until tomorrow’s game against St. Patrick’s Athletic before taking a decision on the future of manager 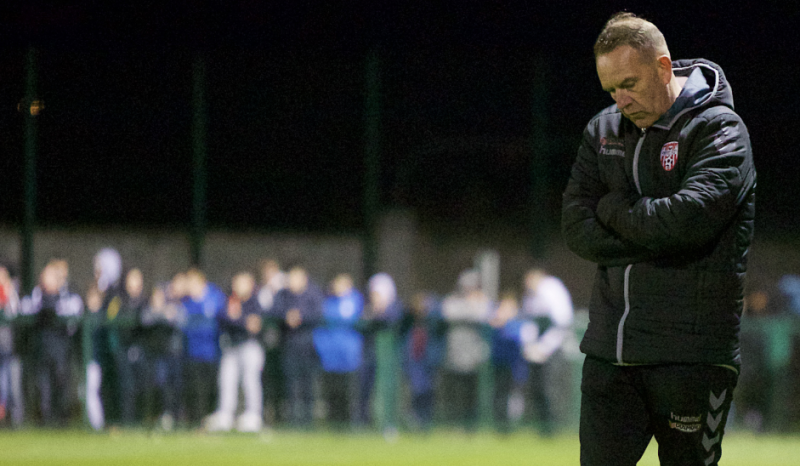 Derry City will wait until tomorrow’s game against St. Patrick’s Athletic before taking a decision in the future of manager Kenny Shiels. The Candy Stripes travel to Richmond Park tomorrow for the final game of a season which has long since gone off the rails and it could well be the last stand for Shiels, just short of three years since he was appointed at the Brandywell. Shiels, who has led the club with great passion in his time in charge, has been unable to arrest a shocking run of form since May, during which time Derry City have lost 16 from 22 league games. The former Kilmarnock manager led Derry to their first trophy in six years when winning the EA Sports League Cup against Cobh Ramblers in September, but the poor form, the latest of which was a defeat to already-relegated Bray Wanderers on Monday, has not helped his cause. That defeat means that even a City victory tomorrow night would not help the club finish above seventh place. Shiels is expected to lead his team to Inchicore tomorrow and whilst he retains great faith in his ability to turn things around at the Brandywell, recent events on and off the pitch have not gone in his favour. The club has closed ranks this week with public opinion now against the manager with many supporters expressing their anger and frustration at the direction the club is going in. “I'm hurting a lot after such a good start to the season and winning the League Cup,” Shiels said after the defeat to Bray. “When things aren't going well there are always scapegoats and the manager is usually the one who takes the blame. I take that responsibility with me. Shiels’ time at Derry City has been one of achievement, having also qualified for the Europa League during his first two seasons in charge. But this season, from poor signings to City’s worst ever defensive record as a League of Ireland team, has made 2018 a season to forget. “The first two years we over-achieved, there's no question about that,” Shiels maintained. “I'm pleased with what I've contributed to the club's upsurge but over the season we have taken a wee bit of a drop back. “I'm doing all I can to put a good team on the pitch.”
ADVERTISEMENT - CONTINUE READING BELOW