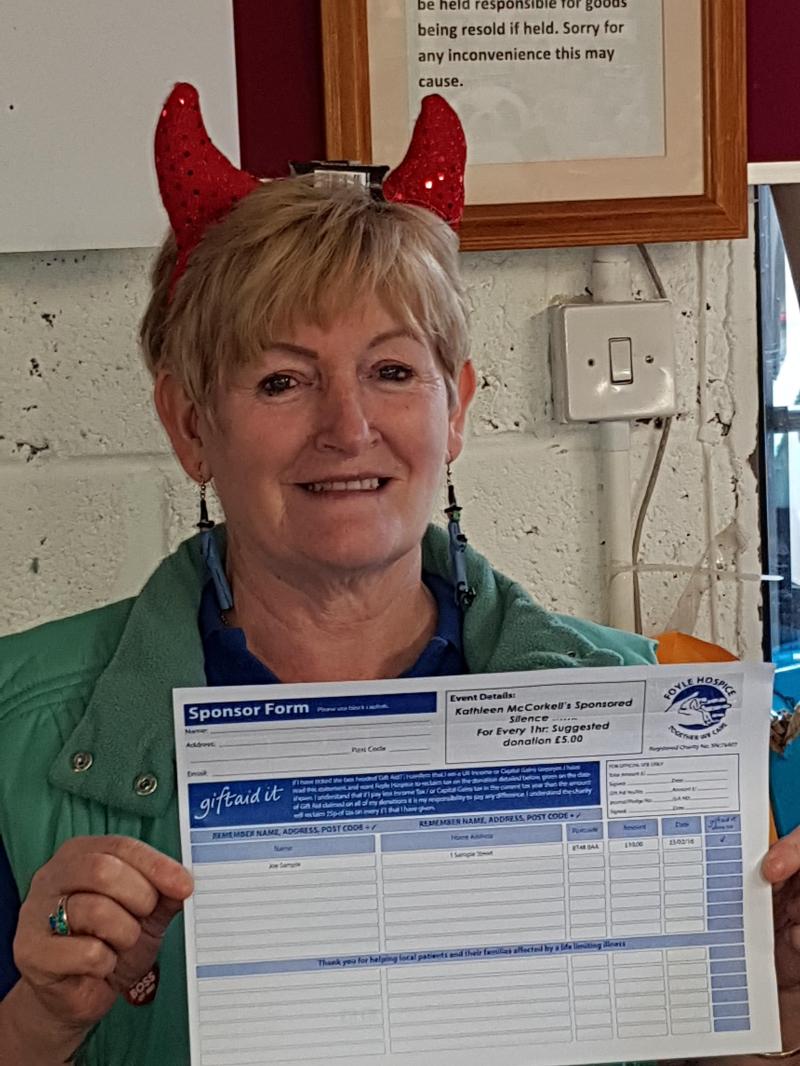 A volunteer with the Foyle Hospice in Derry will be taking on a sponsored silence on behalf of her daughter and other workers at the charity who have recently been diagnosed with cancer. Kathleen McCorkell, who has had to overcome her own battle with cancer and other health difficulties, began volunteering with the Foyle Hospice seven years ago, just after her husband passed away. She also carried out other charitable work with the Pink Ladies cancer support group. Known as the talkative type, Kathleen took it in good humour when she was challenged to take part in a sponsored silence on November 5. Kathleen works at the till in a shop which raises money for the Hospice and assists people in whatever way she can. Speaking to the Derry News, Kathleen explained how she had inadvertently set herself up for the challenge during a conversation with another volunteer. “I just do what anyone else would do, try to help the public,” she told the Derry News. “It’s a second-hand shop and I like to treat people as if they’re coming out of a high street store. “On Thursday I was sitting at the till and I said to Sara-Jane, who I work with: “God, wouldn’t it be great if someone would do a sponsored silence.’ “And no sooner had I said it than she was outside on the phone to the bosses at the Hospice and they brought up a sponsor sheet and everything.” “And I’m doing pretty good, this week people have been giving me a fiver a line. “They must definitely want me to be quiet, I’m going to do my best, I’m going to at least do a couple of hours. “The minute I walk through the door on November 5 is when I start my silence. “They might have to get the masking tape out, but I know I’ll do it.” Support It will be a task that Kathleen gives her all as she’s doing it in support of her daughter and friends, with the money going to the Foyle Hospice to provide palliative and end-of-life care for patients suffering from cancer. “I had breast cancer myself six years ago and had to go to Belfast for treatment,” she explained. “I’ve also had a heart attack and a couple of mini-strokes, but I’m still here to tell the tale. “I’m doing the sponsored silence because my daughter, Caroline, was diagnosed with cancer at the end of May. “She lives in England so I go back and forth every other week. “I’ll also be doing it for members of staff who are going through the same thing as myself.” Kathleen is also one of the Pink Ladies Choir, which was set up in 2001 by several local women who were undergoing treatment for breast cancer and wanted contact with others in a similar position. She added that Hospice has been a great source of support for her and a place where she feels she can give back to the community. “If I didn’t have the Foyle Hospice then I don’t know where I’d be, I came in just after my husband passed away and have been here seven years now,” Kathleen added. “The staff and volunteers are all wonderful people.”
ADVERTISEMENT - CONTINUE READING BELOW