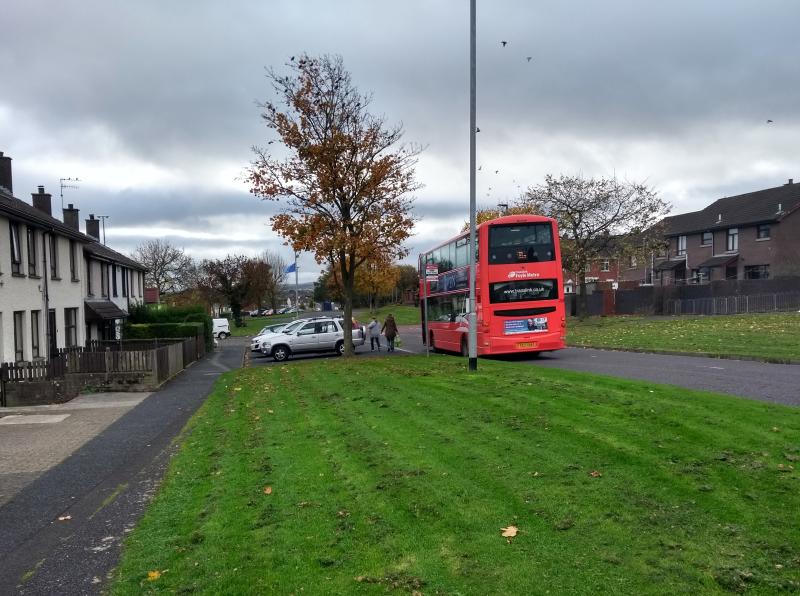 Translink has said an investigation is underway after one of its buses collided with a car which was parked in a Derry street. The incident occurred in the Dunluce Court area of Ballymagroarty on October 18. People living in Ballymagroarty area have previously their voiced concerns about a lack of parking spaces in the area following the incident. Due to an increase in car ownership over the years residents believe there is inadequate parking provision in the area, particularly in the evenings when people return from work. This has led to people parking at the side of the road making it troublesome for buses to pass through, which residents say resulted in the bus ‘clipping’ the car last week. Residents and a local councillor have suggested an audit should be carried out by the Roads Service to determine whether additional areas can be utilised for parking. Speaking to the Derry News earlier this week, the Independent councillor for the area, Darren O’Reilly explained that in Ballymagroarty houses are grouped together in blocks which each have their own parking facilities. However, he added that in the main arterial route houses have instead smaller parking bays to the front of their houses. “When the estate was built it was sufficient because there weren’t as many cars on the road but now every family tends to have at least two cars,” Cllr O’Reilly. “What that’s doing is forcing people to park on the main road, so the bus came around the corner last week and ploughed into a parked car. “It’s also making the job for bus drivers more dangerous at the minute which raises health and safety concerns.” Safety Cllr O’Reilly said the area does have the capacity to deal with the increased volume of vehicles, such as grass verges (pictured), but it needs to be examined by the Department for Infrastructure (DfI) which can then provide solutions. “I was talking to residents afterwards and they said there have been at least four or five houses close to Ballymac Stores which have had cars damaged because there’s insufficient parking. “I’m looking to see if the Road Service can do an audit of the main route to see if there’s sufficient parking and if work can be done. “There are grass verges there which would allow for more provision to be put in place.” A Translink spokesperson confirmed that a bus did hit a car last week, adding that passenger and staff safety is of paramount importance. She added: “The safety of our passengers and staff is our main priority. We do not generally encounter problems with the roads in Ballymagroarty. “We are investigating a report that a bus, with no passengers on board, clipped a parked car. “Where we do experience problems with parked cars, we liaise with the relevant agency.”
ADVERTISEMENT - CONTINUE READING BELOW