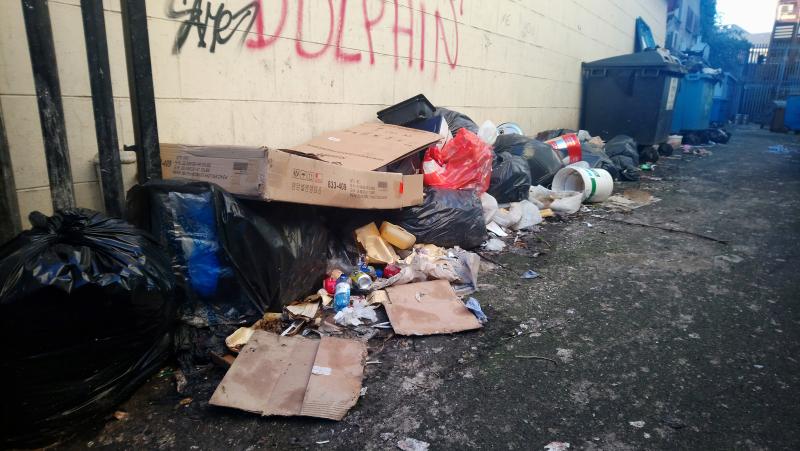 PEOPLE in Derry have been urged to hand over information on who is responsible for the ongoing dumping of food waste at an alleyway in the city centre area. The laneway is situated on William Street, beside numerous local food outlets, and has been cited as a health hazard due to food waste and rubbish that has been indiscriminately dumped there for years. Both Derry City and Strabane District Council, in conjunction with the Northern Ireland Environment (NIEA) have conducted a number of clean-ups at the site over the past year, and spoke with business owners about their responsibilities in terms of waste. Other organisations, including the City Centre Initiative (CCI), and volunteers from local community groups have also removed waste from the area. However, the dumping has continued unabated despite the repeated clean-ups. The Derry News also revealed in July of this year that to date, no prosecutions or penalties has been issued over the ongoing fly-tipping. In a statement issued to the Derry News this week, the NIEA has urged anyone who has information which could now lead to the identification of those responsible. “The fly-tipping of waste at Mews Lane in the William Street area has been an on-going issue for Derry City and Strabane District Council,” a spokesperson said. “The NIEA has previously worked with the Council by conducting joint visits to traders in the area to remind them about their responsibilities for storing and disposing of their waste correctly. “However, our role at present is to continue to monitor the situation and assist the Council where appropriate. The spokesperson added: “We would encourage those who have information which may assist in identifying those responsible to contact the NIEA Enforcement Branch by telephone on 028 9056 9453 or by email at: environmentalcrime@daera-ni.gov.uk.” Solution A spokesperson for Derry City and Strabane District Council said: “The council is aware of the ongoing issue of commercial waste being dumped in the lower William Street area,” the spokesperson said. “The area is private land and while council does not have responsibility for the site, the council’s Waste, Enforcement and Environmental Health teams have been working closely with the Northern Ireland Environment Agency (NIEA) and City Centre Initiative (CCI) to carry out visits to businesses in the area to ensure that effective waste management systems are in place. “Council would like to take the opportunity to remind business owners that they have a responsibility to maintain the upkeep of this central commercial location, which is to the benefit of all businesses in the area and the local economy. “We will continue with the campaign to raise awareness, encouraging local businesses to take pride in their city centre and seeking a lasting resolution to the problem in conjunction with the NIEA and CCI.”
ADVERTISEMENT - CONTINUE READING BELOW