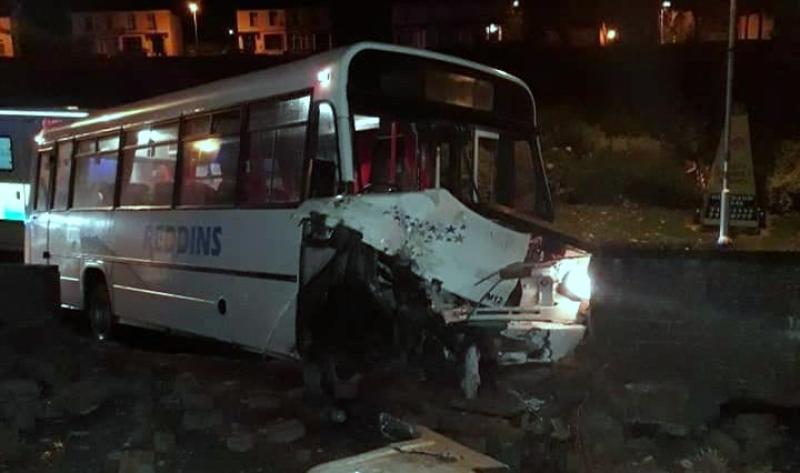 A Derry coach driver and passengers who were being transported home after a wedding reception have been fortunate to avoid serious injury after a bus crash at the weekend. The coach is understood to have been taking people home following a wedding at the Inishowen Gateway Hotel on October 27 when the accident took place at Eastway, Creggan. As the bus made its way down Eastway around 2.30am it crashed into a wall outside Sinn Féin’s main constituency office causing extensive damage to the vehicle and wall. Local councillors have said it is fortunate the bus didn’t travel further down the hill where it would have picked up speed and could potentially have crashed into oncoming traffic at the Lone Moor Road junction or into a house resulting in ‘multiple casualties.’ Around five people were on board at the time and three were taken to Altnagelvin Hospital where they were treated for ‘minor injuries’ A spokesperson for the NI Ambulance Service said a call was received at 2.35am when three people were conveyed to hospital in an ambulance. A fourth passenger was said to have made his/her own way there. “There were no serious injuries as a result of the accident,” he added. A PSNI spokesperson also confirmed that a report was made about the incident shortly after 2.30am. “Substantial damage was caused to both the bus and wall. There were three or four passengers on board at the time and the driver was taken to hospital with what is believed to be a leg injury.” The police spokesperson said other passengers ‘limped’ away from the scene with ‘minor injuries’ and added that police enquiries are ongoing. Independent Councillor for the area Gary Donnelly commented: “The main thing is that it appears nobody was seriously injured in this incident. “This could have been a lot worse, if the bus had proceeded on down the road it could’ve gathered speed and we could be looking at a very different scenario this morning. “We could have been dealing with multiple casualties. “But thankfully it doesn’t appear that anybody was badly injured and my thoughts are with those people who were on the bus.” ‘Frightening’ Sinn Féin Councillor Kevin Campbell commented after part of the perimeter wall of the party’s offices was badly damaged in the early morning accident. He said: “We received a number of calls on Saturday morning from local residents to say part of the wall of our constituency offices on the New Road had been badly damaged in an early morning accident. “It must have been a very frightening experience for everyone involved and I hope anyone injured makes a quick recovery.” He added: “Thankfully there was no oncoming traffic at that time because if it had happened during the day somebody could have been killed. “It’s fortunate that it happened where it did and avoided any oncoming traffic because if it had went on down to the bottom and collided with oncoming traffic or a house it would have been much, much worse. But luckily, and thankfully enough, no one was seriously injured.” Reddins Coach Hire declined to comment about the incident but did say they were ‘thankful that nobody was injured’.
ADVERTISEMENT - CONTINUE READING BELOW