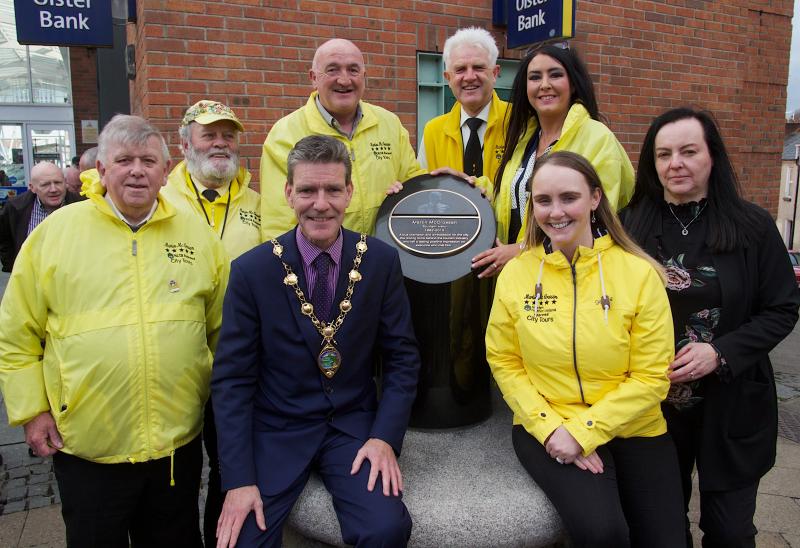 The daughter of popular tour guide, Martin McCrossan, has said that she is delighted there will be a permanent reminder of her father in Derry’s city centre. On Friday, family, friends and colleagues of Martin McCrossan gathered outside Foyleside for the unveiling of a memorial plaque in honour of the late tour guide known as ‘Mr Derry’. The plaque has been installed on top of a plinth type structure and will be located outside the top entrance of Foyleside Shopping Centre alongside the existing street furniture where Orchard Street and Bridge Street meet. It is an area that became synonymous with Mr McCrossan as the meeting point from which his tours commenced with thousands of visitors. Mr McCrossan is widely respected for putting Derry on the map as a tourist destination and being an impassioned advocate of everything positive about the city. He passed away in February 2015 after a short illness, aged 53, and the following year plans were announced for a plaque to be installed in his honour. Speaking after the unveiling, Mr McCrossan’s daughter, Charlene, said her family were delighted that he was being recognised in such a way. As a tour guide with Martin McCrossan City Tours herself, she will be proudly pointing out the plaque ‘to every visitor from all over the world, every single day.’ She said: “It’s amazing to see that Derry City and Strabane District Council have opted to install this permanent memorial to my father. This is something that’s going to be here now forever more and is a permanent structure in our city centre. “It is something that all our guides will be pointing out to every single visitor and letting everyone know that it was my father, Martin McCrossan, who drove the tourism industry in this city.” Martin has been described by many as a ‘true ambassador’ for Derry and he loved many things about the city. It was however the riverfront that held a special place in his heart, Charlene said. “He would’ve loved going down by the river. “He would’ve walked down along there and the whole way out the line and cycled as well. I think that really was one of his favourite parts of the city and I think he’d be very, very happy to see this new River Foyle project that’s just been announced,” she added. “It’s something my daddy always said, that we need to make along the Foyle a more vibrant place and that’s what that project is going to do. He would’ve been screaming about that being absolutely amazing. “But of course, he also loved the City Walls, the Cathedrals and the beautiful buildings.” ‘True champion’ For the entire family, it was a special occasion to have a permanent reminder of Martin every time they walk through the city centre. Charlene commented: “It really does mean a lot, even if you’re up doing your Christmas shopping or just up with the kids, the fact that that’s my father there permanently now just means so much for myself, my mum, my sister and the wider family circle to have this permanent structure here now forever more.” Mayor of Derry City and Strabane District Council, Councillor John Boyle, described Mr McCrossan as a personal friend and said he was honoured to be able to open a permanent tribute to him in the heart of the city centre. He added: “It is fitting that it is located in an area of the city that is synonymous with Martin and the point from where his tours started for tens of thousands of visitors.” The memorial plaque reads, ‘Martin McCrossan Tourism Hero 1962-2015’ and includes a photograph that has been etched into the plaque. It also includes a written tribute as follows: “A true champion and ambassador for the City. The driving force behind the tourism industry who left a lasting positive impression on everyone who met him.”
ADVERTISEMENT - CONTINUE READING BELOW