Derry woman who beat cancer raises £15,000 to help continue the battle against the disease 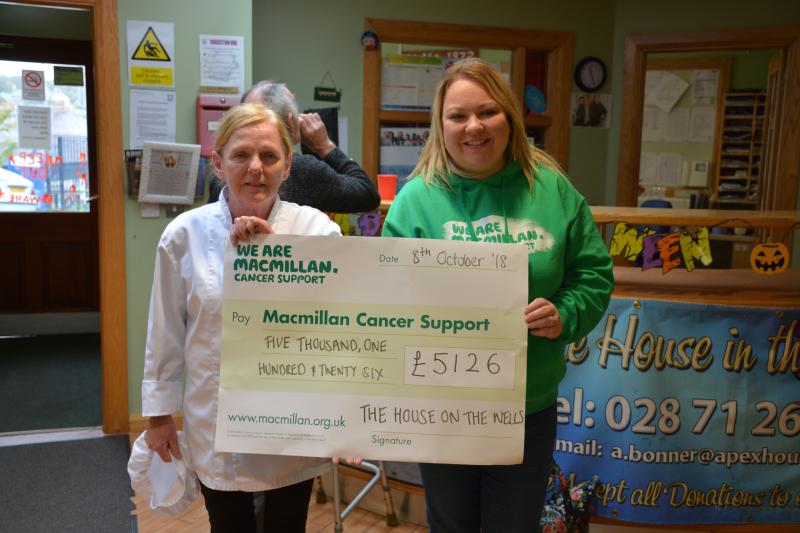 A Derry woman who has survived cancer has raised around £15,000 to help others who are battling the disease. Sadie Callan began her fundraising efforts for Macmillan five years ago, after she overcame breast cancer. As a cook at residential support centre The House in the Wells, Sadie decided to hold a Macmillan Coffee morning and her fun raising efforts have grown year on year since. “After my breast cancer it made me think ‘what can I do?’ Macmillan had been a brilliant help to me,   so it just developed from there,” Sadie told the Derry News. “We’ve tried lots of things like asking small businesses for support and doing collections door to door and in bars. “People are very generous and they are accustomed to it taking place every year now.” Sadie has been supported in her efforts by the staff and residents of the shelter. “The men here have been absolutely brilliant,” she said, “they are fantastic with it all.” “We have lost a few men through cancer and I think everyone knows someone who has been affected cancer and that is why they want to help. “It’s a disease which sadly is rife in this town.” House in the Wells Manager, Andrew Bonner, also paid tribute to Sadie’s efforts. “After going through it herself she realised what people go through cancer and their families must face,” he said. “Her dedication to fund raising is fantastic. “She is always thinking of new ways to raise money, but it is never in your face, it’s not a hard sell. “People know what she has been through and they are very generous.” Mr Bonner said the staff and residents at the facility have always been very charitably minded. “We have a long tradition of giving to charity, I think it’s because of what the House in the Wells represents, the people of Derry are very good at looking after their own. “Earlier this year we raised around £1,300 for the Foyle Hospice at our Feile barbeque. “The men here might have their own problems, but there is an appreciation that there are other people in need too. “They wouldn’t walk past the Macmillan box without putting something in it, sometimes it’s a handful of coppers and sometimes it’s a tenner.”
ADVERTISEMENT - CONTINUE READING BELOW