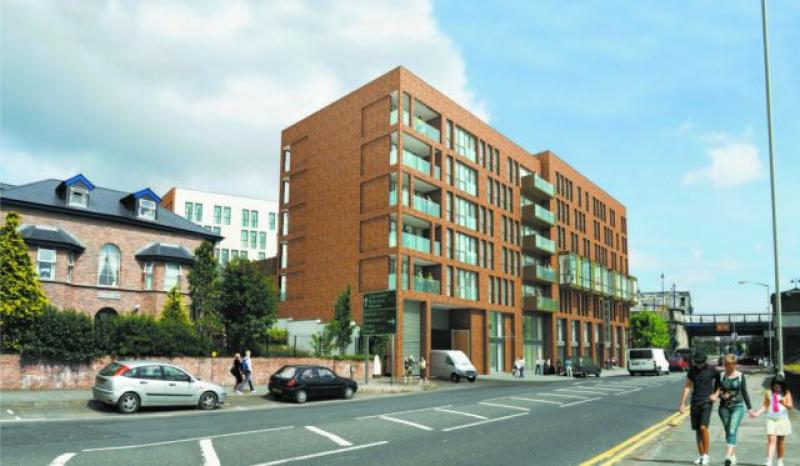 THE owners of the vacant Tillie and Henderson lands in Derry have vowed to begin work on a new hotel at the site over the next year. The former Tillie and Henderson shirt factory site has lain empty for 15 years after the original building which occupied the site was demolished in 2003 after being badly damaged in a fire. In December 2014, planning approval was issued by the Department of the Environment (DoE) to the owners of the site, Andras House Ltd, to build a new 139-bedroom hotel at the vacant plot. The plans also included two new retail units, 15 apartments and integral car parking, which would also take in the Tillie’s Brae and Foyle Road areas. However, there has been no work carried out at the site since the approval was issued, despite the site owners claiming that the construction of the new £10m hotel was a ‘priority’ for the company. The Derry News can also reveal today that the expiration date for the planning approval which was issued in 2014 is November 30, 2019, meaning that work has to begin at the site by that date. If the work is not started by then, the applicant will be required to submit a fresh application. Fresh concerns have now been raised about the lack of progress at the site following the announcement of a £500,000 regeneration project for the Abercorn Road area. The funding was announced as part of an initiative between Derry City and Strabane District Council, as lead partners and the Executive Office, through its Urban Villages Initiative, City Centre Initiative and Triax Neighbourhood Partnership Board. That has now resulted in a total of seven planning applications being lodged with the council this week which will see new shop fronts provided at commercial premises in the Abercorn Road. However, concerns were raised in some quarters that there still had been no sign of movement at the Tillie’s site. It’s also emerged that since the planning approval was issued, there has been no contact between Andras House Ltd and the local council, who took over the bulk of planning powers in April 2015. Earlier this week, the Derry News spoke to Rajesh Rana of Andras House Ltd, who said that the new hotel development was ‘still on the cards’. He added that once their new hotel had been completed in Portrush, the group would then ‘focus’ on the Tillie’s site. “Yes, the Tillies site is still on the cards,” he told the Derry News. “We’re concentrating on Portrush at the minute, and then it’ll be Derry.” The Derry News also asked Mr Rana if he could give assurances that the work would begin before the planning approval expired at the end of November 2019. “Yes, we will begin work within the next year,” he responded. Unwillingness Commenting, the SDLP Foyle MLA Mark H Durkan, who was the Environment Minister when the planning permission was issued, said that the ‘clock is now ticking’ for Andras House Ltd. When permission was granted for this hotel four years ago now, there was genuine excitement about the positive impact the development would have both economically and aesthetically on the city and the immediate area,” he said. “The inability and apparent unwillingness of the owner to commence work here has certainly dampened that excitement and people are now wondering if this key site will remain an eyesore and environmental hazard forever. Mr Durkan added; “The planning consent remains valid for another year so the clock is now ticking for the owner to get started on this project which can create jobs and will also complement the regeneration of Abercorn Road.” Meanwhile, Jim Roddy, City Centre Manager, said that if the site’s owners did follow through on their pledge, it would be warmly welcomed by the surrounding community. “Since the demolition of the Tillies building, this site has lain empty and it’s been a blight on that whole area, which is a key location in our city,” he told the Derry News. “I think everyone was supportive of this new development at the time, and if the owners do indeed begin the work on the new hotel, they will be supported by the community because it can only be a positive thing for that area.” Meanwhile, a spokesperson for Derry City and Strabane District Council said it would be happy to host discussion with Andras House Ltd ‘at any time’ in relation to the hotel plans. “Since the transfer of planning functions to Derry City and Strabane District Council in April 2015, there have been no discussions with the developer regarding this site,” a council spokesperson said. “However, this is a key gateway site into the City which is currently vacant and Council would be happy to engage with the developer regarding development on this site at any time. ABOVE - an image of how the new hotel will look once completed.
ADVERTISEMENT - CONTINUE READING BELOW