Derry’s heritage celebrated and honoured at NI Awards in Guildhall 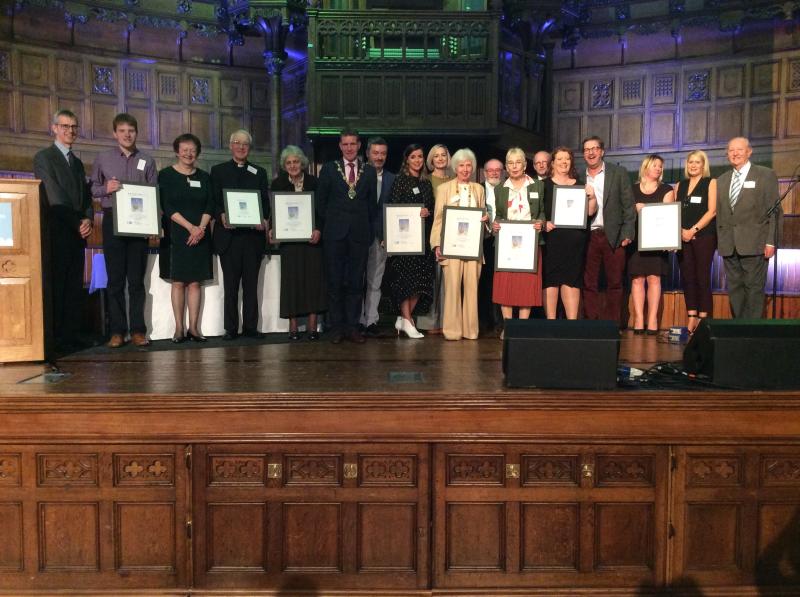 The Foyle Civic Trust was amongst those honoured at the Northern Ireland Heritage Awards which were presented at a glittering ceremony in the Guildhall last night. The event was funded by Derry City and Strabane District Council and the Andrew Lloyd Webber Foundation and seeks to celebrate the efforts of people who go to extraordinary lengths to protect, save and share their local heritage.

The award winner for each category will now move forward to represent Northern Ireland for the chance to be crowned overall Heritage Angel at a high profile ceremony in late November in London.

“On behalf of Derry City and Strabane District Council, I would like to congratulate the winning and highly commended projects from last night’s event which was the first time the awards came to our Council area,” he said.

“We are delighted and proud to have hosted the ceremony and the historic Guildhall proved a fitting backdrop to the proceedings.

“The awards are an ideal way to recognise and acknowledge the selfless contribution of the many groups and individuals who promote and celebrate our local heritage, work that often goes unseen behind the scenes.”

The awards also featured performances of especially composed songs about some of the city’s most historic buildings by renowned local musicians Eilidh Patterson and Eoin O’Callaghan and critically acclaimed County Down singer songwriter Brigid O’Neill.

The Heritage in Song project aimed to combine music and heritage to raise awareness of some of Derry’s most historic sites.

“We were truly overwhelmed by the level of interest demonstrated by the Northern Irish heritage sector with over 80 nominations and applications received from a diverse range of projects.

“The ceremony gave us the opportunity to recognise not only our winners but also everyone who took the time to enter.

“We were also thrilled to be able to link culture and heritage by the inclusion of the Heritage in Song project which has helped promote our message to a new audience.

“The Heritage Angel Awards is a three year project and I hope last night’s success encourages even more entries in 2019 as well as awakening a renewed interest in our local heritage sector.”

Andrew Lloyd Webber, whose charitable foundation helped to found the Heritage Angel Awards, said: “Congratulations to all of the winners of the Northern Ireland Heritage Angel Awards. They all deserve to be celebrated for their significant roles in saving Northern Ireland’s Heritage and for the time, enthusiasm, skills and energy that they have dedicated to this important cause”.

The event also incorporated the inaugural Historic Building Council’s Maintenance Awards, which celebrate the owners of historic buildings who care for their buildings days to day.

These are not dramatic restoration projects, but rather through their hard work these owners have prevented their buildings from falling into a stage where drastic intervention is required.

The maintenance awards are led by the Historic Buildings Council and funded by the Department for Communities.

For full details on how to apply to the 2018 Heritage Angel Awards NI or nominate someone else for an award please visitwww.heritageangelawards-ni.org.uk/.