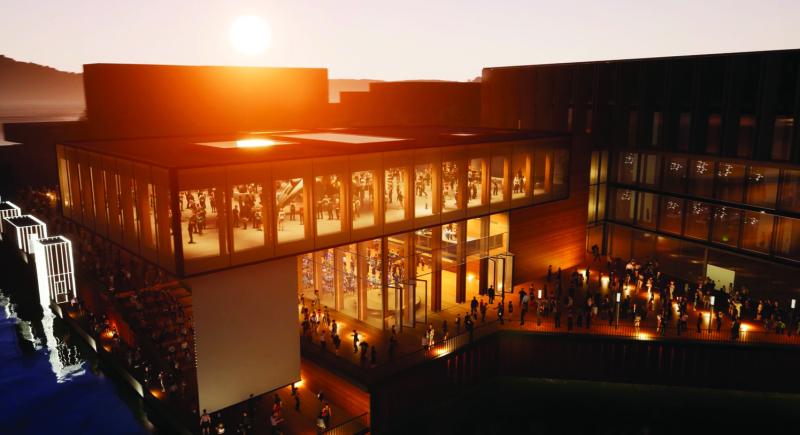 A young Derry man has developed an ambitious project which could ‘transform’ the quayside area of the city by utilising it as a prime site for business and tourism. The proposal, named the Warf Incubators, has been developed by Derry man, Darren Breslin, as part of his master’s degree in architecture. It is a project he has been working on for a number of years after reading about social enterprise projects being explored by local independent councillor and youth worker, Darren O’Reilly. The project draws inspiration from Boxparks, which first emerged in London, and brought young creatives together to run their own fashion, arts, food and drink businesses from shipping containers. Mr Breslin’s proposals are much grander in concept and design but nevertheless seek to achieve the same results by merging indoor and outdoor shared spaces for public use. Both men have recently been speaking to economists, senior figures within Derry City and Strabane District Council and civic leaders throughout the city who have all endorsed the concept. It is proposed that the impressive structure would be situated in a car park adjacent to the council buildings and Mr Breslin believes it would complement other projects currently exploring investment opportunities along the riverfront - namely Our Future Foyle and the Foyle River Gardens. The scheme would be centred around young people and aims to act as a catalyst for creative industries by attracting new investment and offering a range of publicly accessible office, teaching, arts and music facilities. The overarching goal is to generate new opportunities for the local community. Mr Breslin, who works with FaulknerBrowns Architects in Newcastle,explained: “The project will provide fertile ground and will utilise a unique position in offering affordable and flexible conditions for young local, talented members of society. “In return this provides a diverse creative platform, acting as the convergence point for creative individuals, collectives and companies, to connect, learn and share with one another through strengthening bonds and establishing new relationships, consequently ensuring the continued success of Derry’s young, creative community. “The scheme has been tailored to market demand nationally as well as regionally to develop a solid place making strategy. “The focus and vision are the subject of people and connectivity, to create a new part of the city which thrives socially and enjoyably whilst reconnecting the city centre to the northern sector of the city. “By studying the site’s historic urban grain, the Siege of Derry, the city’s participation throughout World War II and its Maritime Heritage - the proposal seeks to reconnect and reinvigorate this historic area of the city, to expand the city centre while, strengthening the integration and connectivity of the city via the quayside.” Social benefits[video width="1920" height="1080" mp4="upload/2018/11/09171343/Night_Vid.mp4"][/video] Councillor O’Reilly believes the project has the potential to regenerate the quayside area of the city. He commented: “This is a concept at the minute but what we’re very keen to do in the next stages is to go in to every school and let them populate it. It’s about young people taking ownership of this idea and bringing their projects into it. “This will regenerate the whole area and all of the people already doing great work in the town can come in and spur this project on. “We believe this is a standalone project, but it can also work alongside other projects. It has to be fluid in order to fit in with existing plans.” He added: “Thirty-three per cent of the area is under twenty-five years of age, we need to be creating something that is both economically and socially beneficial for young people. “This is an area that is underdeveloped, it is a town that has been left behind. We need to get young people a sense of self-worth, that they’re attached to something and I believe that this kind of project can do that.” The architecture of the building pulls from Derry’s rich industrial heritage in shirt fabrication and shipbuilding. Mr Breslin said: “The concept allows the benefit of fantastic views both into and out from the building at key locations. "The gallery and street atrium maintain a concept of visual permeability which allows long vistas into the building, both horizontally and vertically and will encourage the visitor to explore the activities within. “The building will be a concept that integrates social, cultural, economic, and ecological characteristics. “This way, the openness to the public of the building and its integration with the cityscape will exemplify social sustainability.”
ADVERTISEMENT - CONTINUE READING BELOW