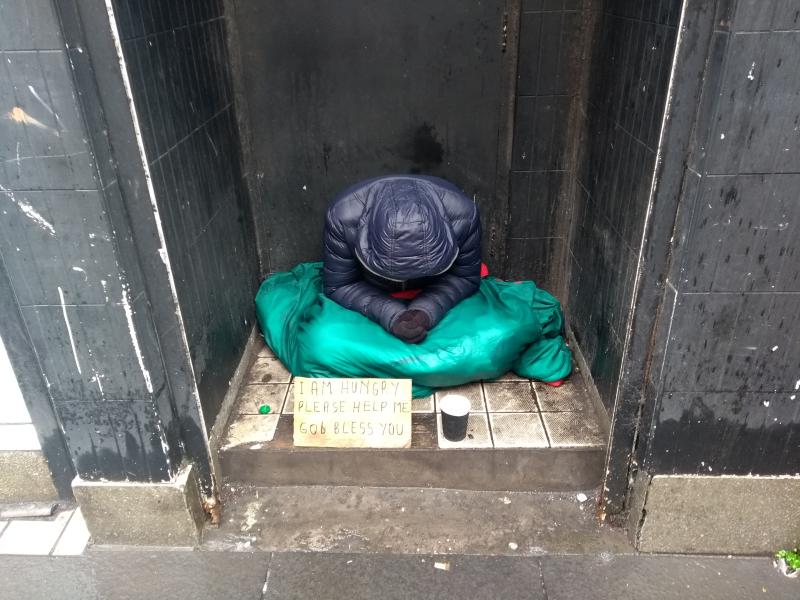 HOMELESS charities in Derry have raised concerns over an increase in the number of foreign nationals sleeping rough in the city centre. Both First Housing Aid and the Simon Community provide accommodation for around 100 individuals who are homeless in the city, however, there are not enough spaces to meet the demand. Speaking to the Derry News yesterday, Eileen Best, Director of Operations at First Housing Aid and Support Services, said many of those now sleeping rough in Derry are non-nationals with ‘no recourse to public funds’. Ms Best added that she is growing increasingly concerned about the issue, given the drop in temperature at this time of year. Efforts are now being made to assess their entitlement to benefits, housing and other forms of support, she added. “Ourselves, and other voluntary organisations have noticed a massive difference in people sleeping on the streets over the past couple of months,” she said. “Since May, the numbers of non-nationals sleeping rough have increased, it’s a big problem and all we’re able to do is give them hats, gloves and sleeping bags. “Because they have no recourse to public funds it presents huge difficulties. “We’re very, very concerned about it, especially in this cold weather. “We don’t want to see anyone on our streets homeless, it’s just not in our nature as Derry people to ignore it or walk past it. “We’re working very hard with public representatives, the Housing Executive and DHSS in order to address the issue but it is unclear at this stage what can be done. “We would have no bed spaces at present as there are so many people homeless in the city but something definitely needs to be done because it’s heartbreaking.” She continued: “The night patrol service regularly patrols the streets and they’re really, really concerned because all they can do is give the homeless items to keep warm, they can’t give them accommodation because we haven’t got any. Accommodation is the biggest issue. “We’re a voluntary organisation and we rely on funds from the public to support these people and Derry people are very, very generous.” Vulnerable Each homeless person’s individual circumstances must be explored and assessments will/have been carried out by the Jobs and Benefits Office and the Housing Executive (HE). The Housing Executive has said that following assessments the individuals have been deemed ‘ineligible’ for assistance at present. First Housing Aid and Support have attempted to find them hostel accommodation, but the hostels are also filled – including the Simon Community’s two sites in Derry. The Simon Community has said it is also acutely aware of the upsurge in rough sleeping in the city centre. A spokesperson for the group commented: “Our Derry team, have and continue to, support and accommodate people who have been rough sleeping in the city or in the surrounding areas. “Recently, they have witnessed more rough sleepers in the city centre and work alongside a service called Derry Night Support to ensure individuals are identified and supported. “No matter what the reason is for a person sleeping rough, it must be remembered that the individual is a vulnerable person. “Our team in Derry are currently supporting individuals who, although choose to rough sleep at times, makes these decisions because of poor mental health. “The Simon Community NI team in Derry works in collaboration with all providers and statutory and voluntary services in the city. Homelessness is not restricted to people who sleep rough, it encompasses a much wider range of individuals with a variety of needs and circumstances and tackling homelessness requires collaboration with all the services.” Ineligible The Housing Executive and other agencies in Derry have been in contact with around a dozen of the rough sleepers concerned to determine whether they are eligible for assistance. A spokesperson explained: “We are aware of the current situation and have been in contact with the individuals concerned. “The Housing Executive is currently involved in an inter-agency approach and will continue to work with other agencies. “Current housing/homeless legislation determines if a person qualifies for housing assistance or is entitled to an allocation of social housing.” She continued: “Under that legislation certain criteria must be met before a person is deemed eligible for assistance or an allocation of housing, which involves an assessment of those being ‘a qualified person’ (ie a worker), a family member of a qualified person, derived from the rights of their children or/and a permanent Right of Residence is established “We can confirm that housing homeless assessments have been carried out, and are deemed to be currently ineligible for social housing assistance. “If these circumstances change, then we will gladly re-evaluate the situation.”
ADVERTISEMENT - CONTINUE READING BELOW