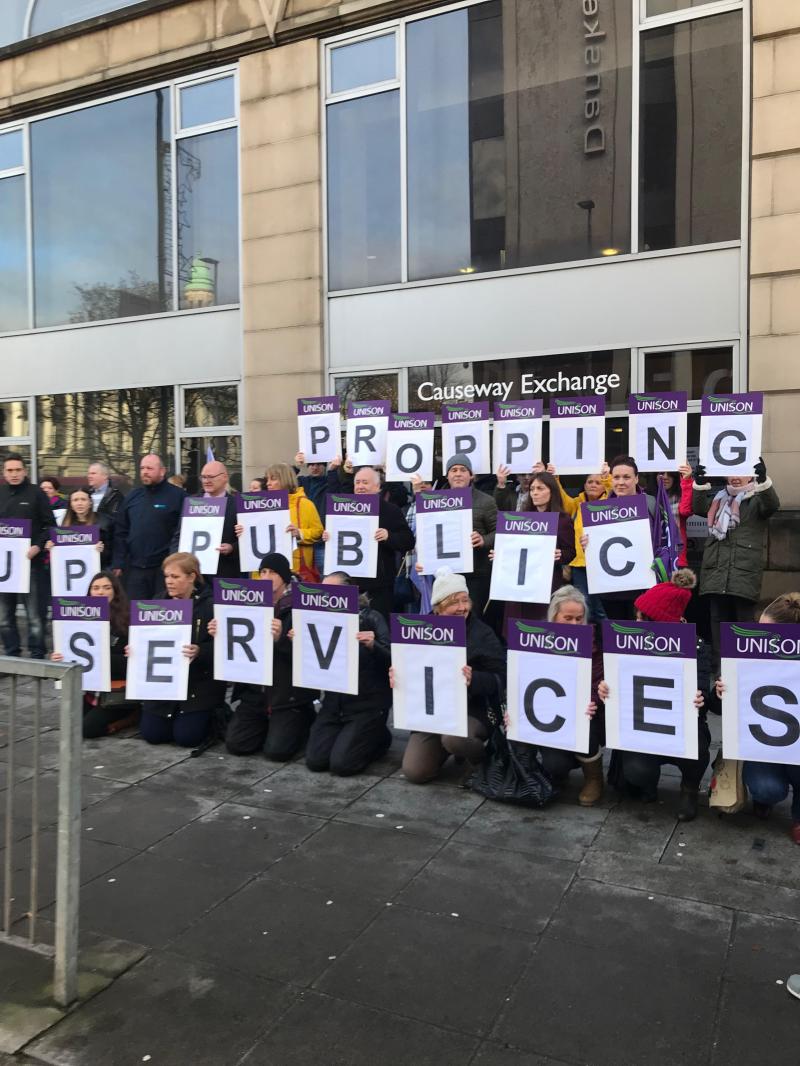 Derry community workers and trade unionists who travelled to Belfast to protest against funding cuts have expressed their anger and disappointment after a government department locked them out of its building. Around eighty UNISON members who work within the DfC/NIHE Supporting People Programme travelled from various areas across the region to present the Department for Communities Permanent Secretary, Leo O’Reilly, with the UNISON Position Paper calling for an independent review into the Supporting People Programme. The Supporting People Programme provides vulnerable people with support to live independently in the community, including through the provision of specialist housing or hostels. The Supporting People Campaign and position paper have come about as a direct result of continuous cuts to the supported living programme which have impacted on service provision and workers terms and conditions of employment, UNISON explained. The trade union said cuts to government funding for the community and voluntary sector have led to service closures, redundancies, reduced staffing levels and pay freezes. And added that this scenario has become ‘particularly acute’ in relation to those projects funded by the Supporting People Programme administered by DfC, in which many of its members work. A position paper was to be hand delivered to DfC Permanent Secretary, Leo O’Reilly, on November 7. However, on the morning of the event UNISON were informed by the department that their building would be in lockdown between 12.30pm and 2pm due to this event now being assessed as a ‘security risk’. Trade Unionist, Niall McCarroll said: “The only security risk present during UNISON’s event at the DfC was the risk of those workers losing their homes and indeed livelihoods due to the continued cuts from the department to the Supporting People Programme which they jointly operate with the NIHE. “For the department to refer to these workers as a security risk is so pathetically underhanded and evidently symbolic of a right-wing establishment approach being taken when dealing with the trade union movement and working-class communities.” He added: “When it comes to listening to working class communities and the mounting pressures being placed upon community services, it would appear the DfC are not interested and place no value on those workers who support homeless individuals and families through the Supporting People Programme. “Let me reassure all those workers employed through the Supporting People Programme that the UNISON campaign to highlight the inequalities across the supported living sector has just begun and our position paper calling for an independent review into the programme will not be ignored and the workers involved will not be silenced.” Workers who attended the event at the Department for Communities (DfC) building came from various organisations including, Apex Housing, Choice Housing, De Paul Ireland, First Housing, Mencap, NIAMH Inspire, Simon Community, Woman's Aid, Praxis and Triangle Housing. UNISON believes that the Supporting People Programme is vital, but has suffered from chronic underfunding, which is negatively impacting on the standard of service delivery and having a significant adverse impact on its members. According to the NI Housing Executive, the Programme supports over 19,000 people every year. A spokesperson for the Department for Communities justified its decision, he said: “As a result of a number of recent protest related incidents at Causeway Exchange, the Department has restricted access to the building. This was explained to UNISON on the morning of the planned protest.”
ADVERTISEMENT - CONTINUE READING BELOW