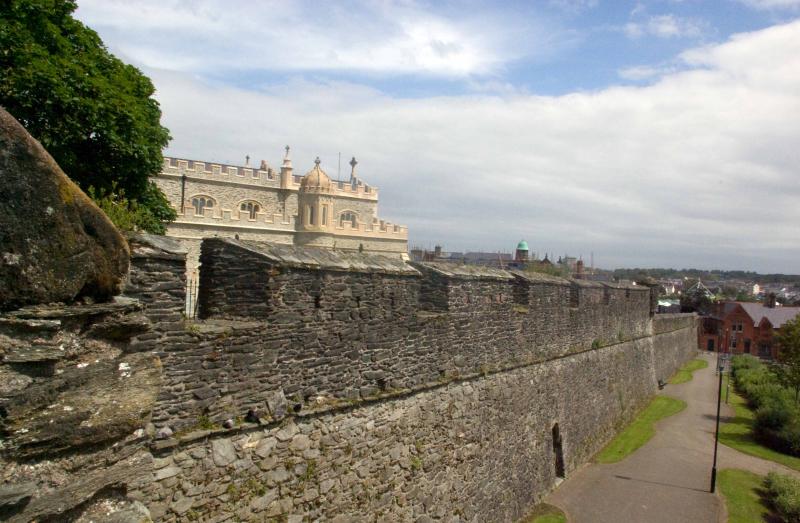 A 20-year-old Derry man was caught with drugs as a result of being recorded CCTV cameras carrying out a sex act on himself on the City's Walls. Eoin McClafferty, from Rathlin Drive in the Creggan area of the city, was arrested by the police in the early hours of February 17 of last year after CCTV operators had earlier reported his behaviour on the city walls to them. Derry Magistrates Court heard earlier this week that after he was arrested for the sex offence , the defendant was searched in Strand Road Police Station where officers found a yellow tin in his inner coat pocket containing five bags of cannabis. McClafferty’s home was then searched and there the police found seven grams of cannabis, a bong and £100 in cash. The court was told the defendant received a Probation Order for committing the sex act. The defendant admitted possessing and possessing with intent to supply cannabis, and also admitted possessing criminal property between June 2016 and February of last year. McClafferty told the police that the cannabis was for his personal use and the £100 was money he had saved up. The court heard that when police examined his mobile phone they found on it drugs related text messages to and from 65 contacts. A prosecution barrister told Judge Philip Babington that one of McClafferty's clients texted to him that she wanted £20 worth of cannabis as she was about to go babysitting. The barrister said McClafferty told the police he started smoking cannabis at the age of fourteen and had gradually become addicted to the drug. He admitted selling cannabis to friends to pay for his own habit. Advertising Defence barrister, Dean Mooney said his client had sourced the drugs for himself and for a group of friends. Mr Mooney said McClafferty's detection on the walls for committing the sex offence had ‘nipped his drugs offending in the bud’. He added that since then, the defendant has been cannabis free and had become a father. Judge Babington said the ‘difficulty’ in the case was the large number of drugs related traffic on McClafferty's mobile phone. “He knows these people who have bought off him before and who are users. He was certainly advertising his wares for sale,” he said. Judge Babington said he would sentence McClafferty tomorrow (Friday) before releasing him on continuing bail until then.
ADVERTISEMENT - CONTINUE READING BELOW