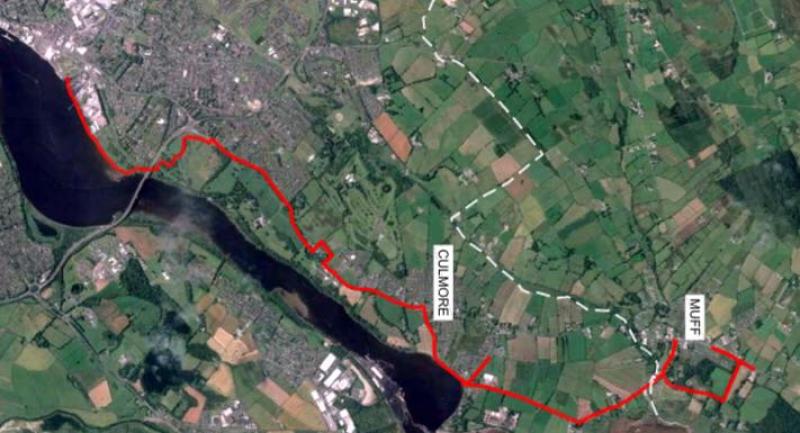 Plans for new a greenway that will facilitate a shared cycling and walking area will go on public display next week in Hollybush Primary School and Muff Community Hall. The emerging design proposals for the planned cycling and walking route that will link Derry to Muff go on display on 28 and 29 November. The two local authorities are planning to construct a greenway and cycle path to facilitate cyclists and walkers. From the route corridors published in May 2018 and following an appraisal exercise, the chosen route is a mixture of the ‘red’ and ‘green’ route corridor options. The main route is as follows: 1. Quay Trail from existing greenway behind Sainsbury’s supermarket, Derry to the entrance of Foyle Hospice on the A2 (this section will also include a new bridge across the Pennyburn river) 2. Entrance of Foyle Hospice along A2 on left-hand side towards Thornhill College 3. Thornhill College to Culmore village, turning right on to Culmore Point Road continuing adjacent to the River Foyle 4. Coney Road (with a link to Hollybush PS on Ardan Road) past Culmore Country Park, turning right on to Canning’s Lane in Muff (with a proposed new cycle/pedestrian bridge at the border crossing) 5. Turning right on to Kilderry Lane and continuing to the R238 6. Connection on R238 back towards the Community Hall and also in the direction of the Muff Community Park; In Muff, the route will also include an additional link to the village centre from further up Canning’s Lane on to Kilderry Lane, coming out at Main Street opposite Borderland. The North West Greenway Network programme manager, Jonathan Henderson said: “Almost 300 people attended the consultation events which were held in May and we received over 100 written submissions. A key outcome from the consultation process is that people are on the whole supportive of the project concept and are keen to see both local authorities construct infrastructure which encourages cycling and walking between the two locations. The rationale for the chosen route has been explained in the Stage 2 Preferred Route Corridor Selection Report which will be available at both events as well as online from 28 November.” Ronan Gallagher, Communications Manager for the project, added: “One of our key objectives is to build infrastructure that will encourage people to cycle and walk to and from their destination in Derry or Muff, but particularly between the two locations. Once completed, not only will we link Muff to Derry, but students at Thornhill College and several primary schools will be able to cycle and walk to school in a safe, segregated environment.” At both events the general public will have an opportunity to leave comments on the proposals. For those who are unable to attend, plans and a comments card will be available at www.nwgreenway.com. After these events, both local authorities will proceed to lodge formal planning permissions in both jurisdictions and will engage with landowners along the route to agree accommodation works. The councils are keen to liaise with residents while minimising disruption during construction. Subject to the approval of planning consent in both jurisdictions, it is hoped that construction work can commence in early 2020. Public information events: Wednesday 28 November 2018 – Hollybush Primary School, Culmore from 2pm to 8pm Thursday 29 November 2018 – Community Hall, Moville Road, Muff from 2pm to 7.30pm
ADVERTISEMENT - CONTINUE READING BELOW